A SKETCH OF HIS LIFE AND WORK By: P. CHALMERS MITCHELL 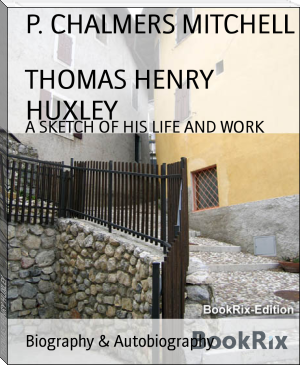 Some men are born to greatness: even before their arrival in the world their future is marked out for them. All the advantages that wealth and the experience of friends can bring attend their growth to manhood, and their success almost loses its interest because of the ease with which it is attained. Few of the leaders of science were in such a position: many of them, such as Priestley, Davy, Faraday, John Hunter, and Linnæus were of humble parentage, and received the poorest education: most of them, like Huxley himself, have come from parents who were able to do little more for their children than set them out into life along the ordinary educational avenues. In Huxley's boyhood at least a comfortable income was necessary for this: in every civilised country nowadays, state endowments, or private endowments, are ready to help every capable boy, as far as Huxley was helped, and in his progress from boyhood to supreme distinction, there is nothing that cannot be emulated by every boy at school to-day. The minds of human beings when they are born into the world are as naked as their bodies; it matters not if parents, grandparents, and remoter ancestors were unlettered or had the wisdom of all the ages, the new mind has to build up its own wisdom from the beginning. We cannot even say with certainty that children inherit mental aptitudes and capacities from their parents; for as tall sons may come from short parents or beautiful daughters from ugly parents, so we may find in the capacities of the parents no traces of the future greatness of their children. None the less it is interesting to learn what we can about the parents of great men; and Huxley tells us that he thinks himself to have inherited many characters of his body and mind from his mother.