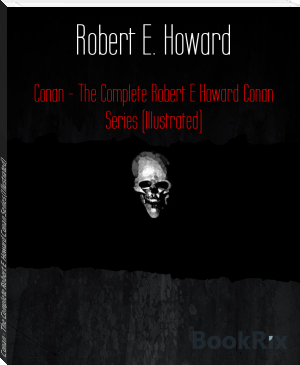 18 original Conan Stories by Robert E. Howard
Cimmeria - A Poem
The Phoenix on the Sword
The Scarlet Citadel
The Tower of the Elephant
Black Colossus
The Slithering Shadow or Xuthal of the Dusk
The Pool of the Black One
Rogues in the House
Gods of the North
Iron Shadows in the Moon or Shadows in the Moonlight
Queen of the Black Coast
The Devil in Iron
The People of the Black Circle
A Witch Shall be Born
Jewels of Gwahlur
Beyond the Black River
Shadows in Zamboula or Man-Eaters of Zamboula
Conan the Conqueror or The Hour of the Dragon
Red Nails
The Hyborian Age
Robert Ervin Howard (January 22, 1906 – June 11, 1936) was an American author who wrote pulp fiction in a diverse range of genres. He is well known for his character Conan the Barbarian and is regarded as the father of the sword and sorcery subgenre.