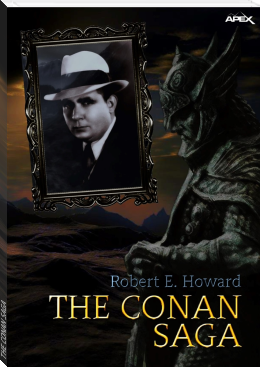 "Howard was the Thomas Wolfe of fantasy, and most of his Conan tales seem to almost fall over themselves in their need to get out."

"A hero of mythic proportion, fashioned by a storyteller who helped define what a modern fantasy should be. "Rogues in the House" is one of the finest tales of sword and sorcery ever written."

Conan the Cimmerian: the boy-thief who became a mercenary, who fought and loved his way across fabled lands to become King of Aquilonia. Neither supernatural fiends nore demonic sorcery could oppose the barbarian warrior as he wielded his mighty sword and dispatched his enemies to a bloody doom on the battlefields of the legendary Hyborian age. Collected together in one volume are - besides the poem Cimmeria - A Poem (1932) and the essay The Hyborian Age - Conan's World (1936) - Robert E. Howard's tales of the legendary hero, as fresh and atmospheric today as when they were first published in the pulp magazines of more than seventy years ago: The Tower Of The Elephant (1933), Rogues In The House (1934), Shadows In The Moonlight (1934), Black Colossus (1933), Queen Of The Black Coast (1934), The Slithering Shadow (1933), A Witch Shall Be Born (1934), The Devil In Iron (1934), The People Of The Black Circle (1934), Shadows In Zamboula (1935), The Pool Of The Black One (1930), Beyond The Black River (1935), The Black Stranger (1932), Red Nails (1936), Jewels Of Gwalhur (1935), The Phoenix On The Sword (1932), The Scarlet Citadel (1933) and The Hour Of The Dragon (1935).

I just couldn't get enough of this story. If you have some great stories like this one, you can publish it on Novel Star, just submit your story to hardy@novelstar.top or joye@novelstar.top