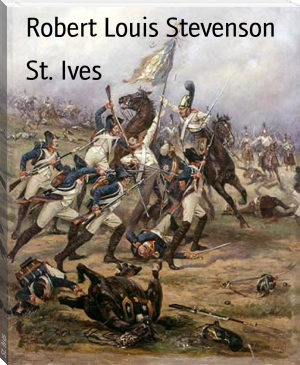 St. Ives is a historical adventure novel by Robert Louis Stevenson. St. Ives tells the story of a French hussar officer Jacques St. Ives imprisoned by the British in Scotland. The story is an exploration of the recurring theme of the polarity of human nature. St. Ives (whose family motto is "Audentes Fortuna Juvat"--“Fortune favors the daring"), a witty, womanizing veteran of Napoleon's wars, kills a brother officer in a duel. In order to avoid having to fight all the officers of the dead man's regiment, as well as to have time to bed his latest flame, St. Ives insults his commandant to be given a demotion. Instead, St. Ives is broken to the ranks and, now a private in an infantry regiment, he proceeds to get himself captured by the British. Sent to a prison camp in Scotland, St. Ives soon becomes involved in the love life of the prison's commander, Major Farquar Chevening and with Flora Gilchrist and her unmarried aunt. He is also reunited with his émigré grandfather, a ci-devant count, and his wastrel brother, who have been living in Scotland since the deaths of St. Ives's father and mother during the Revolution. Intrigue, masked balls, disguises, duels, and hair's-breath escapes ensue.