We In Rhodesia, God In Heaven 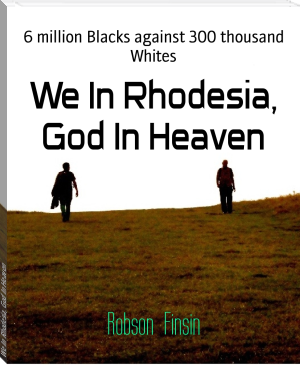 Cyprian Alfred Boothe is 18 years old. He is about to enlist to fight in the Rhodesian bush war together with his childhood buddy, Kenny. Inwardly, Alf is torn between fighting for the country he loves - the Jewel of Africa - and the justice of the bush war itself after having watched his family being murdered in cold blood by a group of Black freedom fighters months earlier at their farm. Nonetheless, with his friend they go to enlist in the Selous Scouts when the recruitment drive comes to their country club in Karoi with the full intention of lawfully avenging the murder of his family. However, the two pot smoking teenagers are not prepared with what occurs at the temporary recruitment centre. They realise too late that all warring sides of the bush war are present and what’s worse the enemy is not only outside but within the hall as well and the one within is one of their own, and they just can’t walk away because no one is allowed to.

What people are saying about this book:

“This is one book which everyone should have in their collection of must have books. Compelling and no holds barred Rhodesian historical fiction which takes no sides. It is worthwhile to read and after reading, totally unforgettable.” - Pandari Circle

“The social and political commentary that is woven in the story is thought provoking and challenges you to re-evaluate what you think you know about Rhodesia and the causes of the bush war.” The New Parade

“This is a must read. The noirish characters in this story will impress themselves on you like you’ve been hit with a bare knuckled fist. The language is strong but is weaker than the theme. Also the narrative seamlessly moves from the plots present time to the past and back again, even reaching into this future with its accurate predictions of the ‘warvetocracy.’” - Horizon Magazine