Down The Barrel of The Gun 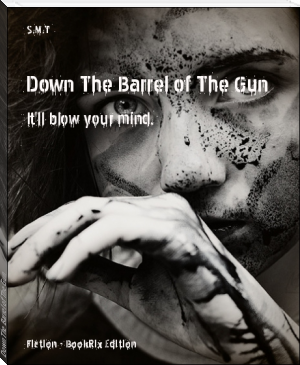 He was deadly as the gun he aimed with such precision. As lethal as the hidden blade mechanisms strapped to his wrists. As merciless as the promising glint of suffering-to-come in his eyes.
He was to be feared and avoided. So, typically, he had to recognise me as his mate.

that was totally awesome amazingly detailed i was actually hoping there was another book to continue it but since there isn't i'm gonna have to ask you please continue!!!

write moree and hit me up when you finished iit. this book is sooo awesmee and interresting

Thank you for your comments! I'm sorry you've had to wait for the book to be continued. I will be resuming it after my last exam towards the end of this month, so expect some updates!

i luv this book I will read regularily like darkhunt does and i will comment regularily i want more!

ok you know you have to write more now dont you? lol

Hi its me !! I love your story but it shouldnt be X-Rated. I have read stronger language in a non x-rated books. Keep at it and I will be checking regularily for updates!!!! (Funny pretend threat). Keep it up or i will set my vampire warriors on you!!

I like your story line, however it feels unfinished to me...