The Surrender of Napoleon Being the narrative of the surrender of Buonaparte, and of his residence

on board H.M.S. Bellerophon, with a detail of the principal events that occurred in that ship between the 24th of May an By: Sir Frederick Lewis Maitland 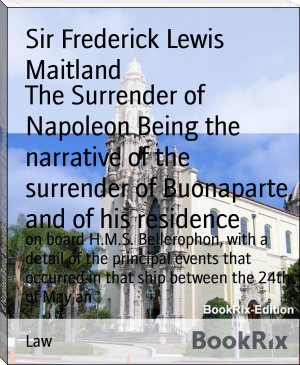 Rear Admiral Sir Frederick Lewis Maitland, KCB (7 September 1777 – 30 November 1839) was an officer in the Royal Navy during the French Revolutionary and Napoleonic Wars. He rose to the rank of rear admiral and held a number of commands. The most famous event of his career occurred when Napoleon Bonaparte surrendered to him aboard HMS Bellerophon, marking the final end of the Napoleonic Wars.