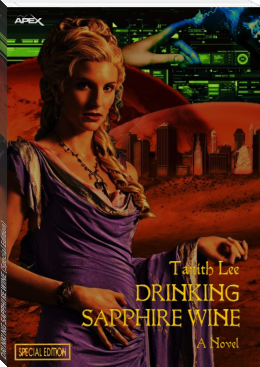 Four-BEE was an Utopian city. If you didn't mind being taken care of all your long long life, having a wild time as a “jang" teenager, able to do anything you wanted from killing yourself innumerable times, changing bodies, changing sex, and raising perpetual hell, it could be heaven.

But for one inhabitant there was always something askew. He/she had tried everything and yet the taste always soured. And then he/she succeeded in committing the one illegal act—and was thrown out of heaven forever.

But forever is not a term any native of that robotic utopia understood. And so he/she challenged the rules, declared independence, and set out to prove that a human was still smarter than the cleverest and most protective robot...

You don’t need to have read Tanith Lee's DON’T BITE THE SUN, which set the original scene, to find DRINKING SAPPHIRE WINE of the same high merit that distinguished this author’s THE BIRTHGRAVE.