Rise like a Phoenix , set your Life free By: Thaddeus Hutyra 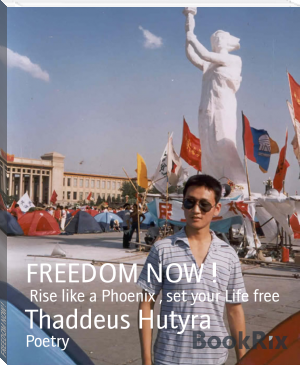 Heroes, you who had given your lives
for China you believed in, your China
one of justice, dignity, free of misrule
in the embrace of the Heavenly sky

Heroes, you the students who believed
China can be free, democratic
as elsewhere in the Free World
in the embrace of worldwide liberty

Heroes, you on the Tiananmen Square
crashed down brutally on the 4th of June
with assault rifles and tanks, lots of blood
and against all human values dear to humankind

Heroes, you who fought for a new China
despite of some people saying disturbingly
China can never be democratic, no chance
On the contrary, democracy is for all !!

Heroes, you the scintillating Soul of China
who believed firmly and determinedly
no nation can be denied liberty, freedoms and dignity
Your soul, Soul of China is on the march !!

Heroes, you the students of Tiananmen revolution
the one of 1989 which moved hearts
of the entire nation, eternal hearts of love
Yes, freedom, love and brotherhood shall win one day !

Heroes, you were brutally crashed down
on one early morning, at a peaceful dawn
with your blood and lives taken away
You're the monument of free China to come !!

Heroes, they used tanks and army against you
while you wanted just freedom innocently
and dignity for every single individual
Your cause is not dead, your cause is alive, more than ever !!

Heroes, your '89 Heavenly Democracy Movement
is written down in history of China
Kept in the soul of the nation forever, the Soul of China
written down in China's chapters as finest ever

Heroes, you shall be the winner in the end
and the Goddess of Freedom shall return
to her rightful place on the Tiananmen Square
both, under the bright Sun and the shimmering stars

Heroes, know it the entire Free World tributes you
You're part of the great family of nations
who chose for freedoms, liberty and dignity
You're written down in the annals of the world !!