ARGUMENTS OF CELSUS, PORPHYRY, and THE EMPEROR JULIAN, AGAINST THE CHRISTIANS 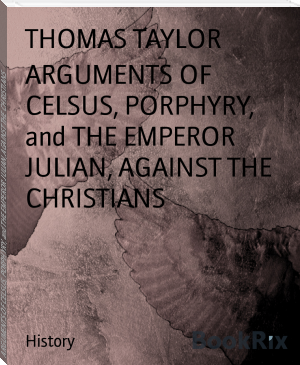 Born in London, Taylor was educated at St. Paul's School, and devoted himself to the study of the classics and of mathematics. After first working as a clerk in Lubbock's Bank, he was appointed Assistant Secretary to the Society for the Encouragement of Art (precursor to the Royal Society of Arts), in which capacity he made many influential friends, who furnished the means for publishing his various translations, which besides Plato and Aristotle, include Proclus, Porphyry, Apuleius, Ocellus Lucanus and other Neoplatonists and Pythagoreans. His aim was the translation of all the untranslated writings of the ancient Greek philosophers.