How Madame Influenced Modern Concepts of God and Jesus By: Ulrich R. Rohmer 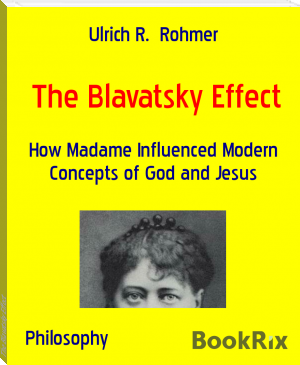 This book is a collection of many different texts approaching the phenomenon Blavatsky and her influence on how Western world is dealing with God and Jesus.
There is of course a huge ocean of manifold perceptions throughout space and time, and humans had always a tendency to change the way of perception and thinking compared to their ancestors.
A human has no other chance after having been thrown into this world than studying a great deal of texts and witnesses in order to find plausible reason (at least for himself or herself) to find answers on what is real and what is truth. Thousand nine hundred years ago Epictetus wrote his famous ταράσσει τοὺς ἀνθρώπους οὐ τὰ πράγματα, ἀλλὰ τὰ περὶ τῶν πραγμάτων δόγματα, meaning Men are disturbed not by things, but by the views which they take of things (Enchiridion 5). Dogma comes from δόγμα, and this means nothing else than view or opinion – a quite human and at least harmless business coming from language alone. But humans have transformed both, view and opinion into a sharp sword able to harm or even kill those being considered dissenters. That way dogmatism became a synonym for bad taste and constriction.
Madame Blavatsky was against church dogmatism and finally got trapped in her own dogma based ideology called theosophy, and the whole complex has indeed changed the world. At that the story is not over yet.
Those texts I provided consist of freely available material found at different pages, and they will challenge you to listen carefully to your own flow of thoughts and feelings. No one is supposed to either love or hate Madame Blavatsky and her work, but rather finding a kind of understanding giving you comfort to live according your mental, intellectual and soul perception of God and Jesus. Maybe you will discover the value of the New Testament text (27 books as usual) anew even without being really able to name such process correctly. Blavatsky has opened a door which is now wide open, and it can´t get shut again by merciless apologetics. Some see Satan raging in this world blaming Madame, others perceive new spiritual possibilities as well as frontiers. See for yourself and have a little patience. Even Blavatsky is not bigger than God who will surely not leave those alone who wish to be grounded in love, truth and humble kindness as the New Testament Jesus reveals…

Read Book
Book Recommendation
Your heart in mine