The Book Of Enoch And The Syriac Revelation Of John (Peshitta)

A Textbook Inviting To Discover A Close Relation By: Ulrich R. Rohmer 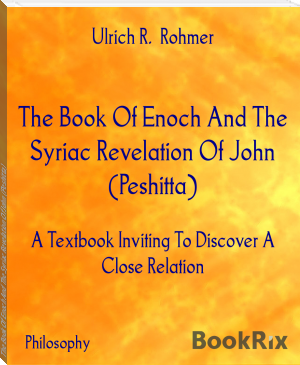 Instead of getting lost in infinite canon discussions hoping to clarify the question whether there is a right and valid canon being approved by God or not, any interested reader should simply start to transcend his or her prejudice by reading different texts, and the field is huge and extremely interesting. Any diligent student will be astonished of the richness the texts do provide on both, different angles of perspectives and manifold cross connections.

The Book of Enoch is an important example in this regard. Many passages in the Book of Revelation can only be understood from the background of Enoch. In order to show that I have added the Book of John of Patmos, but this time not from a Greek translation as usual, but from the so called Syriac Peshitta, which is the Syrian bible and as such very old too. This is also a special reference to those countless Christians who have been recently killed by rebels supported by people telling us of a deep necessity to fight terrorism – you hopefully know what I mean. My thoughts and prayers go out to Syria. The Peshitta is a wonderful and deep witness of biblical words transmitted by those belonging to the oldest Christians in the world.

Professional theologians – and I know from what I´m talking – are in large part good and honest people. Many work hard “chewing text by text” in order to find meaning and what is called kerygma, which they are able to preach and say to listening people. But sometimes they talk too much about texts instead of trusting in the power of efficacia we mentioned above. Thus a sermon or speech often becomes more important than the courage to expose mind and soul to a text by oneself. This is the reason many people have not learned simply reading texts by themselves. We live in times of so called secondary literature – important are not original texts demanding patience, time and diligence, but secondary texts on original texts: books on the bible, books on apocrypha, books on pseudepigrapha, books on everything from Pontius till Pilate. But the real challenge is the original text, and it is my intention to have The Book of Enoch and The Revelation published to provide many readers an easy access to amazing and very old texts.

Read those words all by yourself! Look for yourself and find cross connections! Find for yourself the hidden treasure in very old texts which have been moved minds and souls of believers at all times! Go, read and see! And have patience…