A Blind Esperantist's Trip to Finland and Sweden, to Attend the Fourteenth International Esperanto Congress 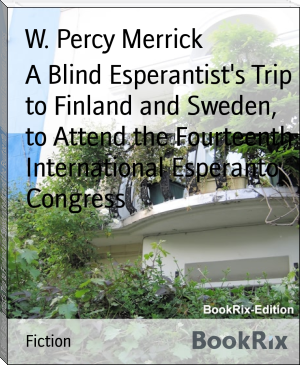 On Thursday, August 3rd, my wife and I left Hull on the "Arcturus"
with some fifty other Esperantists, including Mr. John Merchant
(President), and Mr. Warden (ex-President), of the British Esperanto
Association. Until Saturday the sea was smooth, though the weather
was dull, and we all ate heartily and chatted and joked in holiday
mood. The ship's company were all Finn's, and none of them spoke a
comprehensible language except the Captain and Purser, who spoke
English well. The waitresses were very demure, some of them wearing
their hair strained back from the forehead in puritan fashion. The
only time they were known to laugh, despite the efforts of the more
frivolous members of the party to make them do so, was on the Sunday
evening, when one of the tables having been vacated by the diners, a
lurch of the ship shot all the crockery on to the floor in a heap of
ruins; then they stood round and laughed merrily; here was a real
joke!