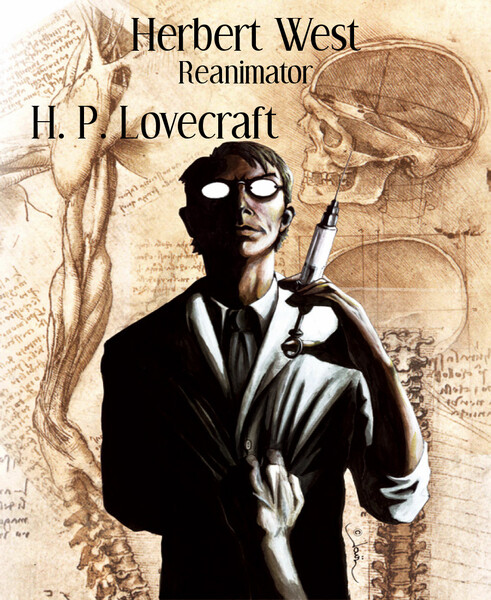 I. From The Dark


Of Herbert West, who was my friend in college and in after life, I can speak only with extreme terror. This terror is not due altogether to the sinister manner of his recent disappearance, but was engendered by the whole nature of his life-work, and first gained its acute form more than seventeen years ago, when we were in the third year of our course at the Miskatonic University Medical School in Arkham. While he was with me, the wonder and diabolism of his experiments fascinated me utterly, and I was his closest companion. Now that he is gone and the spell is broken, the actual fear is greater. Memories and possibilities are ever more hideous than realities.


The first horrible incident of our acquaintance was the greatest shock I ever experienced, and it is only with reluctance that I repeat it. As I have said, it happened when we were in the medical school where West had already made himself notorious through his wild theories on the nature of death and the possibility of overcoming it artificially. His views, which were widely ridiculed by the faculty and by his fellow-students, hinged on the essentially mechanistic nature of life; and concerned means for operating the organic machinery of mankind by calculated chemical action after the failure of natural processes. In his experiments with various animating solutions, he had killed and treated immense numbers of rabbits, guinea-pigs, cats, dogs, and monkeys, till he had become the prime nuisance of the college. Several times he had actually obtained signs of life in animals supposedly dead; in many cases violent signs but he soon saw that the perfection of his process, if indeed possible, would necessarily involve a lifetime of research. It likewise became clear that, since the same solution never worked alike on different organic species, he would require human subjects for further and more specialised progress. It was here that he first came into conflict with the college authorities, and was debarred from future experiments by no less a dignitary than the dean of the medical school himself -- the learned and benevolent Dr. Allan Halsey, whose work in behalf of the stricken is recalled by every old resident of Arkham.


I had always been exceptionally tolerant of West’s pursuits, and we frequently discussed his theories, whose ramifications and corollaries were almost infinite. Holding with Haeckel that all life is a chemical and physical process, and that the so-called "soul" is a myth, my friend believed that artificial reanimation of the dead can depend only on the condition of the tissues; and that unless actual decomposition has set in, a corpse fully equipped with organs may with suitable measures be set going again in the peculiar fashion known as life. That the psychic or intellectual life might be impaired by the slight deterioration of sensitive brain-cells which even a short period of death would be apt to cause, West fully realised. It had at first been his hope to find a reagent which would restore vitality before the actual advent of death, and only repeated failures on animals had shewn him that the natural and artificial life-motions were incompatible. He then sought extreme freshness in his specimens, injecting his solutions into the blood immediately after the extinction of life. It was this circumstance which made the professors so carelessly sceptical, for they felt that true death had not occurred in any case. They did not stop to view the matter closely and reasoningly.


It was not long after the faculty had interdicted his work that West confided to me his resolution to get fresh human bodies in some manner, and continue in secret the experiments he could no longer perform openly. To hear him discussing ways and means was rather ghastly, for at the college we had never procured anatomical specimens ourselves. Whenever the morgue proved inadequate, two local negroes attended to this matter, and they were seldom questioned. West was then a small, slender, spectacled youth with delicate features, yellow hair, pale blue eyes, and a soft voice, and it was uncanny to hear him dwelling on the relative merits of Christchurch Cemetery and the potter’s field. We finally decided on the potter’s field, because practically every body in Christchurch was embalmed; a thing of course ruinous to West’s researches.


I was by this time his active and enthralled assistant, and helped him make all his decisions, not only concerning the source of bodies but concerning a suitable place for our loathsome work. It was I who thought of the deserted Chapman farmhouse beyond Meadow Hill, where we fitted up on the ground floor an operating room and a laboratory, each with dark curtains to conceal our midnight doings. The place was far from any road, and in sight of no other house, yet precautions were none the less necessary; since rumours of strange lights, started by chance nocturnal roamers, would soon bring disaster on our enterprise. It was agreed to call the whole thing a chemical laboratory if discovery should occur. Gradually we equipped our sinister haunt of science with materials either purchased in Boston or quietly borrowed from the college -- materials carefully made unrecognisable save to expert eyes -- and provided spades and picks for the many burials we should have to make in the cellar. At the college we used an incinerator, but the apparatus was too costly for our unauthorised laboratory. Bodies were always a nuisance -- even the small guinea-pig bodies from the slight clandestine experiments in West’s room at the boarding-house.


We followed the local death-notices like ghouls, for our specimens demanded particular qualities. What we wanted were corpses interred soon after death and without artificial preservation; preferably free from malforming disease, and certainly with all organs present. Accident victims were our best hope. Not for many weeks did we hear of anything suitable; though we talked with morgue and hospital authorities, ostensibly in the college’s interest, as often as we could without exciting suspicion. We found that the college had first choice in every case, so that it might be necessary to remain in Arkham during the summer, when only the limited summer-school classes were held. In the end, though, luck favoured us; for one day we heard of an almost ideal case in the potter’s field; a brawny young workman drowned only the morning before in Summer’s Pond, and buried at the town’s expense without delay or embalming. That afternoon we found the new grave, and determined to begin work soon after midnight.


It was a repulsive task that we undertook in the black small hours, even though we lacked at that time the special horror of graveyards which later experiences brought to us. We carried spades and oil dark lanterns, for although electric torches were then manufactured, they were not as satisfactory as the tungsten contrivances of today. The process of unearthing was slow and sordid -- it might have been gruesomely poetical if we had been artists instead of scientists -- and we were glad when our spades struck wood. When the pine box was fully uncovered, West scrambled down and removed the lid, dragging out and propping up the contents. I reached down and hauled the contents out of the grave, and then both