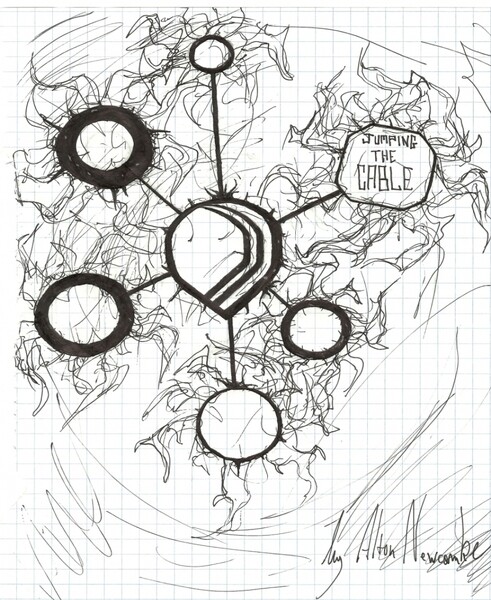 Log, start listening...
Well, I’ve officially been relieved of duty pending what the Scalpers are calling further investigations, and on top of it all I’ve also been confined to my quarters. As far as I can tell, after three days of repetitive questioning and barrage of accusations; we’re probably about an hour out from Monroe Space Station… maybe even closer... The one thing I do know for sure is that the Scalpers don’t have a clue what they’ve got on their hands… and for thatmatter, neither do I. (audible sound/clicking)
Damn scalpers, they kept asking me over and over again, What happened? Where were you?, all I could tell them was I didn’t know... (audible sound/sigh) How could I?
Needless to say, it’s been very difficult to make sense of things lately; especially since I don’t even know how to begin explaining what happened to us, or even where it happened.(audible shuffling)
Where to begin? Where, to, begin? (audible sound/tapping). Ha! The whole damn thing’s so crazy I’m not even sure if I know when it all began. Did I say when?... I meant where. Yes… definitely where. (audible sound/sigh)
This is Chief Warrant Officer Smithfield, star date…(audible sound/shuffling) something….
For what it’s worth…If, and when this log has been through an official review, I want it noted that Petty Officer Row and Petty Officer Marks performed admirably in an….. (audible sound/sigh) unnatural situation, that none of us could have foreseen, and I want their records to reflect their dedication to not only the mission, but also to their fellow officers…. I also want it noted that their loyalty to the Temspire Galactic Web never faltered (audible sound/sigh)
Of course if the captain had been on the bridge instead of holed up in his quarters, things may have turned out differently …Ha!
Anyway…(audible sound/sigh) we were slated to ride the cable at 2100 hours from Jump Port thirteen, one of hundread or more junction ports spread across space in a network of multi-stations that the Web considered the quickest way to travel in deep space...Ha!(audible sound/sigh)
According to what I got from the mission brief a week before our mission; Jump Port thirteen thats located somewhere in the back waters of the Virgo Super Cluster,and a stones throw from sector 7 in the farthest most point of the spiral arm of Scutum-Centarus was supposed to be our missions staring point; and on top of that we were also being given the privilege of flying one of the Temspires newest editions to the galactic fleet, a scout ship named “Curiosity”, a prototype, of course... Ha!
“Curiosity” was the wave of the future... or at least she was according to Captain Prekless... and the Web...(audible sound unknown)Ha!
She was definitely a beauty, that’s for sure, and she came equipped with the latest and the greatest, something that was called a, “cable line HS drive”, that was specially designed for the quick and easy transport of reconnaissance personnel for routine scouting missions, but I know a scouting ship when I see one and she was definitely no scouting ship... she was a warship if I ever saw one.
Anyway;according to officials, she was designed to circumnavigate weeks of travel in Hyperspace by consentraring the power from two or more jump ports in the network of pre-existing multi-ports into her HS-drive...
(audible sound unknown)
What would have normally taken weeks for any other ship would only be hours for Curiosity... Or so it was said.

(audible sound unknown) Ahhh! That’s better; Never thought I was gonna be able to do that again… Ha!