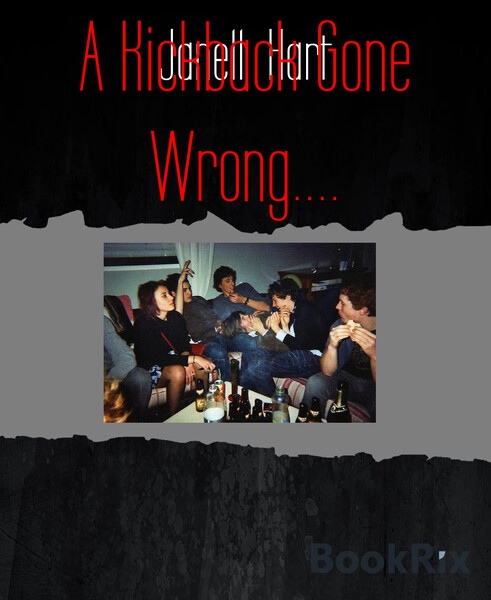 Here, my days is normal like any other. It’s just me and my best friend, Nicole (My ride and die buddy). We’re in school cutting up or should I say getting on the teacher’s nerves. A few hours later, when school was let out, and we get home, my parents weren’t home so I decided to go to Nicole’s house. When we walked into the house, we both find a letter that said: “Nicole, your father and I  left to take care of an emergency. We will not be back until 11:30. DON’T THROW ANY KINDS OF PARTIES!?!?!? ~Mom and Dad~”. As soon as I knew it, my best friend threw the note away and I just went upstairs to do my homework. About an hour later, my friend walks into the room with a facial expression that I’d seen before and I was thinking that something was getting ready to happen, that I personally didn’t know about. She then said these words that made me feel like I shouldn’t be there…. “We’re gonna have a kickback”. I then said “What the hell are you thinking?!?!? You’re parents said NOT to throw ANY parties!!!”. Then Nicole said “Man… Fuck my parents…. They probably won’t even know about me having a party till a month later…. besides, there are going to be some cute guys here and you really need to get out there and socialize”. Before I could say anything else, I paused for a second and thought to myself…. “Maybe she’s right….. I’d been busy with school a lot and I really need to kickback and take back my social life”. I finally agreed to the plan and she said gave me a outfit to go change in while she was on her phone texting everyone about the party. As soon as I knew it, I heard knocks on the door and the voices of many people I knew… FROM SCHOOL. When Nicole told me to come out of the bathroom so she could see how the outfit looked on me, she started to squeal like a little kid who took a trip to the candy shop. I was wearing a short, black mini-dress with a sweetheart neckline and my hair was straight flat. She then gave me some black stilettos to walk around in and in my mind, I was like “What the hell are you becoming???”. About 15 minutes later, all you could hear was music being blasted so loud that if you were having a conversation with someone, you couldn’t even hear them and it would seem as if you're lip syncing random words. I went downstairs and all I kept saying to myself was: “As long as I don’t do some dumb shit, I’ll enjoy myself”.

Chapter 2-- Falling for Him

When I got downstairs, all I could see was a sea of teenage kids dancing up on one another in one corner and in the other corner, all I could see was another group of them making out and rubbing up on each other. While I was making my way to the couch in the other room, I see seniors in one group rolling blunts and smoking weed. Now here’s the thing about me…. I’VE NEVER DRANK OR SMOKED IN MY ENTIRE LIFE. When I got to the couch, I just sat there and I was just looking at other people dancing with their boy/girlfriends. Out of the blue, some guy comes and sits next to me. now I have to admit….. He was fine as hell. He had dark hair just like me and his figure was very buff. He was about my skin color and was around 6’2. He then looked at me and was the first to say “Hi Cutie” and winked at me. I smiled and said “Hey” and the next thing you know, we ended up sparking a conversation with each other. It turned out that we had many things in common and that we were in the same grade. While we were talking, my favorite song comes on from the dance floor. I then got up and went to the dance floor and started to dance. While I was dancing, I felt a strong and buff body on my back and I instantly got scared. I quickly turned around and it turned out to be the same guy that I was talking to earlier. When I went back to dancing the night away, I then felt his hands on my hips. While the both of us were dancing, I started to think to myself: “Damn…. Here I am dancing with a fine guy and I’m having fun”. The the next thing I knew, he whispered in my ear: Can I get you a drink?”. Like I said before, I never drank or smoked in my life, but my mind was like: “Hey… I guess I could try, of course it’s going to me my first and last time”. I then answered “Sure” and he walked away. While I was waiting for him to return, Nicole came running to me and asked about the guy that I was talking to. As I was telling her the whole story, another guy walks by and she instantly gets hooked to him and she walked away. When he finally returned, he handed me my drink and it turned out that he got one too. I ended up telling him that I never drunk in my life and he told me that it was cool and that it would be “fun”. On the count of three, we both took a big sip of our drinks and in a few seconds after, I ended up drinking my whole cup in one sip. He looked very impressed and astonished. I then went back to the dance floor and I started to dance the night away some more. he then came up behind me and he started to put his hands on my hips and dance with me. About ten minutes later, he then whispered in my ear: “Come upstairs with me”. In that moment after he said that to me, it felt as if I was in mind control and he was controlling me. I then said “Sure” and I followed straight behind him. When we got to the top of the stairs, I started to wobble and just as I was getting ready to fall, he caught me and pulled me closer to him. We were making eye contact and then he leaned in towards me and as soon as his lips were about to touch mine, I quickly pulled away and I told him “NO!”. He then came up to me and started to rub up on me calling me “baby” and as I was trying to get out of his hold, he covered my mouth so my voice would be muffled and then dragged me into the nearest bedroom.

When he dragged me into the nearest bedroom, he locked the door and out of nowhere he slapped me and I started to cry. It felt like I’ve been tricked with one thing and lead to bad things. As I was screaming for help, he then pinned me face down onto the bed and the next thing I knew, I felt something very hard and stiff plunge inside of me and I screamed as loud as the music was playing. It then started to move in and out quickly and my feet started to curl up. I then realized that I was getting raped by the same guy who I thought was very nice and laid-back. I had to do something…. but what could I do? Then I thought of a plan that would not only grab his attention but my “best friend”. About ten minutes later, after he was done with me, I slowly got up and I grabbed the nearest object that I could find… a lamp. While he was straightening himself up, I swung the lamp to his head and he fell on the floor and in that second, he didn’t move. I then grabbed my stuff and ran out of the room. While I was running down the stairs, I was limping and when I was on my way to the door, I ran into nicole, who I also thought was my one and ONLY best friend. She asked me where I was going but I didn’t answer. I looked dead into her eyes and told her “ I don’t know about you, but I think we shouldn’t be best friends anymore, not even friends nor acquaintances. I’m getting ready to go home and think about all the stuff that happened here tonight and then I’ll decide how to move on from here…. Bye bitch..” and then I opened the door and walked away. She had a very hurtful look on her face but at that time, I didn’t even care at that point. While I was walking, I thought to myself: “Can’t trust anyone, not even your best friend”. And I also made a note to myself… “NEVER GO TO PARTIES, UNLESS IT’S WITH SOMEONE YOU TRUST”