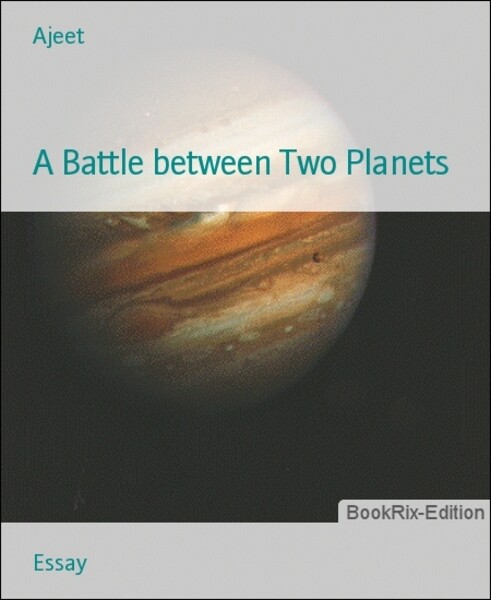 A long time ago, before any sort of life had evolved on the Earth, there used to be two medium-sized planets, namely Andromiter and Jupelster. Both of them had intelligent life on them which gradually evolved. Sadly, much like our Earth, their population increased to beyond what their planet could support. Both of them were eyeing each other’s planet.
Inevitably, there was a war. Using all the technology they had, they fought. Mass destruction began to take place. They began to seek allies in the neighbouring planets. Uranus, sadly, had been a friend of both planets and refused to help. Other planets also refused to involve themselves in the bloodshed.
I, at that time, was one of the best scientists in Uranus. I decided to help the two planets settle with an agreement. I soon invented the XC3ZN, a machine that increased the gravity of a body to tremendous amounts. I decided to join the two planets with the gravitational force. I showed one of my trusted friends how to operate the machine and left the solar system using my space portal, because I felt sad at the colossal loss and destruction in the Solar System. In Andromeda, I watched the planets using the camera I had installed in the machine.
Soon all the Jupelstroids and the Andromiterians arrived at Saturn while the joining took place. Sadly, my friend could not control the machine and stopped it too late. He increased the gravity too much. Instantly, the two planets clashed. Just as he was celebrating the joining, the gravity sucked him in. After that, I do not know what became of him. The Jupelstroids and the Andromiterians joined their names and named the new planet Jupiter. They flew to the planet, but the immense gravity killed them and crushed everything else on the planet. The gravity sucked in majority of the other planets’ atmospheres as well, and eventually their species died out as well.
After that, the only planet having habitable conditions was Earth. I settled there and found myself to be the most advanced life form on the planet. I left my legacy by copulating it with what is known today as the ‘Human race’. But my offspring have long since forgotten to address me as ‘Father’. I have monkeymen like Darwin challenging my existence while the rest most disrespectfully call me ‘Adam’.