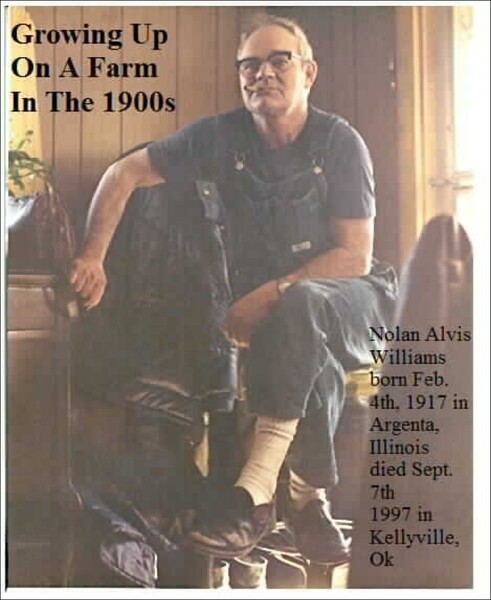 These are some of the Memories of my father, Nolan Alvis Williams written shortly before he died. Born Feb. 4th, 1917 and died Sept. 7th, 1997

These are some of the memories that Nolan Alvis Williams written shortly before he died. Born Feb. 4th, 1917 and died Sept 7, 1997

Year 1920 ( 3 years old)
We lived on a farm at Newburgh, Ill. One day mom was going to town so she put us kids in the buggy and got old PET our driving horse out of the barn and started to hitch her to the buggy and the steam engine was grading the road and it came up the hill, it was puffing real hard and scared old pet and she ran away thru a pig alley by the shed but us kids and buggy didn’t fit thru she broke the harness and ran down in the pasture. Mom was crying and us kids were laughing it was funny to us. We didn’t get hurt any at all just shook up.
Ossie Sullivan got a new victrola ( record player) so we went over to their house to hear it play thru that big horn with a dog on it. It was pretty nice. We wanted dad to get one but we could not . Only people with money had them.

Year of 1921 ( 4 years old)
We moved north to the Miller place by Friends Creek Cemetery. Jay Gosnell lived across the road to the south of us. Jess Kaufman lived on the west side of the road.
Gypsies always came in the summer and camped by the creek. They bought milk and eggs and chickens from us and probably stole some for Dad and Mom trusted everyone in those days. Bums use to come by and dad would feed them under the big maple tree in the front yard. Us kids would watch them eat -they were really hungry . One wanted to sleep in the barn one night but Dad told him, No. That night our barn burnt down burnt 15 cows and seven horses . Dad got 3 horses out but the barn caved in on him . He got out but he had some bad burns . Then the veterinarian, Ed Nelson, rode a horse around the county and took up a collection of $250 . This bought a team of horses and harness for the others and seed to plant the corn and oats. The machine shed did not burn so we had machines to work with.
Dad started to mow hay and the mower broke so he borrowed Jesse Kaufman’s mower but Jess did not tell him to put a bolt in the tongue to hold the neck yoke from sliding when he started to mow down the hill it slid down the tongue and mowed a horse’s back foot off so they had to shoot the horse and bury him . Elmer Nelson shot the horse for Dad. I don’t think dad could shoot him for we had raised him from a colt.
He fixed the mower next day he went back up the hill to mow when he in for dinner we could not find Faye so Mom and Dad and the neighbors started to hunt for her. They finally found her asleep in the hay field where Dad had been mowing. She was holding an old rag doll but was alright.
A big wind and hail storm came up one evening the front door kept blowing open . Dad shoved it shut and heavy plate glass broke and cut the arteries and leaders in his arm. They called doc Lutz and he came out to the house in a buggy and fix it up for him. Then a few days later Mom went down in our old cave to get some butter, Neal threw a big lag screw at a cat just as Mom came up the step . He missed the cat but hit Mom in the top of her head and cut it pretty bad. It knocked her dizzy for awhile but she didn’t go to the doctor.

Year of 1922 ( 5 years old)
Things started out pretty good this year. I started to school. Me and Neal walked two miles to school at Wild Cat School. Ruth Traxel was our teacher. She was going with Melvin Hiser. He would come and get her in a buggy.
She would have some of the older boys fix the fire in the big old furnace. Sometimes they would like some fun so they would put rifle shells in with the coal and when they went off the kids went out the doors and windows pretty fast. Floyd Ranbarger and Lyle Tuggre some times Ducrabs McCoy would do it too. They always told the teacher it must have been dynamite in the coal from mining.
One day we was playing “Keep Away” with a basket ball. The teacher tried to get it away from Neal he raised up and his head hit her nose. She fell down and blood started to run and she was kicking around till the kid’s started screaming that she was dying but she only had a broken nose and Neal had to stay after school and sweep the floors for 3 weeks.

year 1923 ( 6 years old)
Big News! This year Ossie Sullivan got a new model T touring car and came by and took us all for a ride . Went faster than a horse and buggy. It got dark so he stopped and lit the lights with a match. They burned kerosene. Didn’t make much light so we went slower going home.
I went out to the new barn to get the wheel barrow . When I came out the door Neal threw a piece of coal to hit the barn and scare me. But instead he hit me in the ear and knocked me down. Kind of dizzy but okay.
We went to town with Dad with the load of corn. There was ice and snow on the Newburgh hill. The team fell down and we had a terrible time getting them up then a guy came by with a team with ice shoes. So he put them on ahead of our team and helped us up the hill then we sold the corn and went down to the black smith shop run by Billy West and he put ice shoes on our horses.