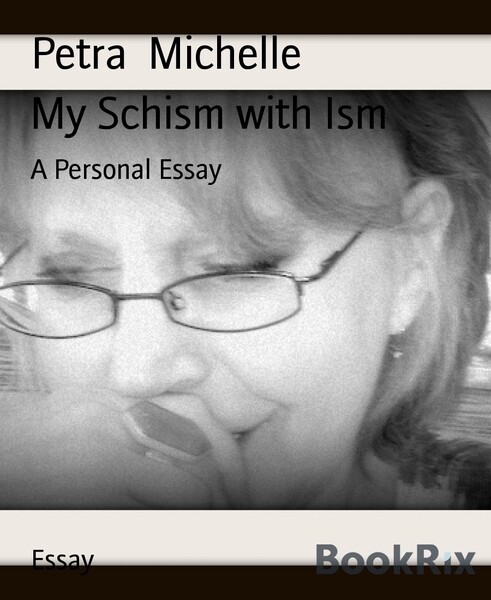 My Schism with Ism

"Formalism, by being an 'ism' kills form by hugging it to death." Peter Viereck, American Poet/Writer.

In my opinion, ism is the most powerful word in the English language in its ability to transform an ordinary word into extraordinary.  Consider absolute to absolutism or person versus personalism.  In my life, isms impelled a gamut of emotions and circumstances ranging from paranoia to pleasure, and instability to success.

Fascism loomed before I was born.  During WWII, my father, then an athletic 16-year-old, had been captured by the Nazis during their invasion of Yugoslavia, imprisoned in a labor camp in Germany, and at the end of the war, freed by British forces.  For years thereafter, my family was subjected to his waves of neuroticism.   At the slightest provocation by mother who was of German, Polish, and French descent, he'd call a Nazi.  "Nazism is an acronym for the National Armed Zealots in the Slaughter of Mankind", or a version of that, he'd rant.

I was born in the wake of McCarthyism when my parents emigrated to the United States.  In our search for Americanism, my siblings and I ducked and covered from communism and nuclear fallout.  I prayed catechism would allay my fears of an apocalypse, only to conclude after having been born in sin which would evoke God's wrath to condemn me to burn in hell eternally, that religious fundamentalism was a euphemism for sadism.

I sought solace in aestheticism, and felt blessed when I found Emily.  "Wild Nights - Wild Nights!" I wished were mine, but plagiarism weighed heavily on my consciousness thanks to my English teacher's fanaticism regarding the subject.  "Perhaps she'd been incarcerated for same?" I often wondered.  Surely, it was no coincidence she took the class on a field trip to our local prison to watch the cell doors slam shut.  "From all the Jails the Boys and Girls ecstatically leap..."

I threw in my pen and replaced it with a brush of Cubism, Pointillism, too.   In my Junior year of high school, I explored eroticism, not with boys but by painting noses in every conceivable position.  When a friend asked about one in particular, I replied, "Isn't it obvious?  World peace through nudism."

In the 1960's, hipsterism surfaced.  Through Allen Ginsburg's poems of freedom and Bob Dylan's songs of protest along with Dr. Martin Luther King's and the Beatles' chants of love and peace, plus a pinch of Timothy Leary's "turn on, tune in, drop out," revolution was in the air.  While in college, many chose activism over pacifism.  I, along with my college sisters, protested the Vietnam War and sought equality in feminism.  That I could choose whether to burn my bra may now seem trivial, but considering I could finally declare my cup size with some degree of certainty, was truly liberating.

By the time I married, my generation turned its attention to pragmatism and materialism.  Should a woman wait until after a career to have children?  A house before children?  Become a millionaire before children?  Buy mutual funds or government bonds?  Open an IRA or a CD?  What awards...excuse me, returns could I expect if I'd invest in one thousand shares of MTV stocks?  Just a few blue chips off the old block of capitalism.

While factories belched wealth in the production of computers and Nikes worldwide, globalism was reduced to a simplism by Bell Atlantic's "We're all connected."  Environmentalism burst forth with urgency to the realism of acid rain, irradiated foods, and global warming.  Greenpeace was on the march and I joined in, aghast as rain forests fell prey to expansionism.

Not normally affable to narcissism, I admit to Petraisms which affirm endearments which Gracie Allen could only have understood.  Gracie: "George, wasn't the Phil Risutto delicious?"  Cigar in hand, George: "You mean the shrimp risotto?"  Yes, George, the Phil Risutto with Pataki mushrooms."  "Say good night, Gracie."  "Good night."

But to quote a Yogism, "it ain't over til it's over," realizes the journey can be excruciating.  My divorce was less painful than the tortuous political climate between conservatism and liberalism.  Constitutionalism tolerates freedom of speech and expression, not indifference to the poor and inequality.  Has altruism become an anachronism?  Or is humanitarianism, merely, just another ism.

Dedication:
To my parents, Linda and Joseph