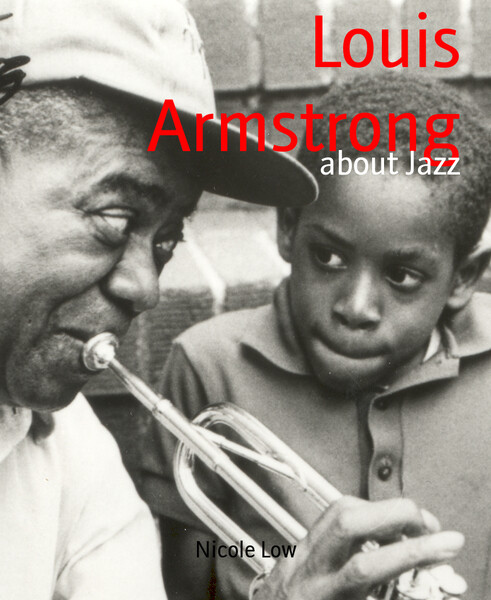 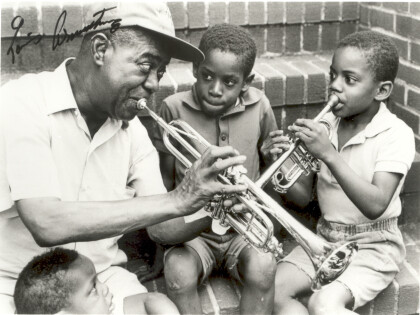 Louis Armstrong, born in New Orleans on July 4, 1900 became the dominant figure in jazz. His music has had a lasting influence to this day, and to this day we have chance to listening it free on itunes.

Louis learned the trumpet in the Waif's Home for Boys when he was thirteen having been caught in an over boisterous New Year's celebration involving firearms. This year and a half stay turned out well for Louis and of course for jazz.

From 14 to 17 years old he regularly heard the best groups in town, above all Joe "King" Oliver [cornet] who played with the band led by Kid Ory [trombone].. Ory had a rollicking band and Oliver was the star. When King Oliver got an offer to go to Chicago, Louis at 17 was given the trumpet chair. (A cornet is like a trumpet but shorter and more compact. They play  in the same key and are interchangeable in sound and technique.)

One view of the dynamic Louis Armstrong:

In the small hours, a friend and I were wandering around the French quarter, when suddenly I heard a trumpet in the distance. I couldn't see anything but an excursion boat gliding through the mist back to port. Then the tune became more distinct. The boat was still  far off. But in the bow I could see a Negro standing in the wind, holding a trumpet high and sending out the most brilliant notes I had ever heard. It was jazz. It was what I had been hoping to hear all through the night. I don't even know whether it was "Tiger Rag" or "Panama." But it was Louis Armstrong descending from the sky like a god. The ship hugged the bank as if it were driven there by the powerful trumpet beats. I stayed absolutely still, just listening, until the boat dropped anchor.

At 22 Louis received a telegram from King Oliver inviting him to Chicago to join the band. That band had Lil Hardin on piano. Louis and Lil soon wed. Louis first recorded with King Oliver in April 1923. Louis was making his mark. By 24 he had accepted an offer to join Fletcher Henderson [arranger] in New York. Here is one view of his arrival there.

Then Louis Armstrong hit town! I went mad with the rest of the town. I tried to walk like him, talk like him, eat like him, sleep like him. I even bought a pair of big policeman shoes like he used to wear and stood outside his apartment waiting for him to come out so I could look at him. Finally, I got to shake hands and talk with him! ...Rex Stewart [trumpet]

At 25 Louis returned as featured soloist in his wife's band- Lil's Dreamland Syncopators. Always the featured soloist, his aggressive confident style was being copied everywhere. They tried, at least.

The "Hot Five" and "Hot Seven" recordings made when he was 25 to 28 are still the classic small group jazz formation. These recordings have had an enormous impact on generations of musicians. His soaring trumpet, ready to burst, yet always in control still thrills today. Even Charlie Parker a generation later would quote from Armstrong's solos.

Louis also may have invented "scat singing". Legend has it that the lyrics fell off the music stand and Louis simply sang a chorus of swinging nonsense syllables. It became so famous that it was printed in the sheet music. By his 30th year his star was secure.

The musicians surrounding him were starting to catch up with his virtuosity. Style was changing rapidly now with radio and movies. Louis remained king of his personal vision. Every jazz musician has been touched by his music.

One trumpeter who had begun to master the high-notes that Armstrong played with such ease was told:"Now, you made your point. Now, let them think it's a little hard for you to do it. You're making it look too easy." Art-topping version of "Hello Dolly" recorded at 63 years old. One misses the true Armstrong if one starts here.

Criticized- by jazz elitists too young to remember his glory years as an innovator-for doing such a popular Broadway tune he replied. It's not the number that counts, it's the way you play it. That's what makes jazz.

Dedication:
It's not the number that counts, it's the way you play it. That's what makes jazz.