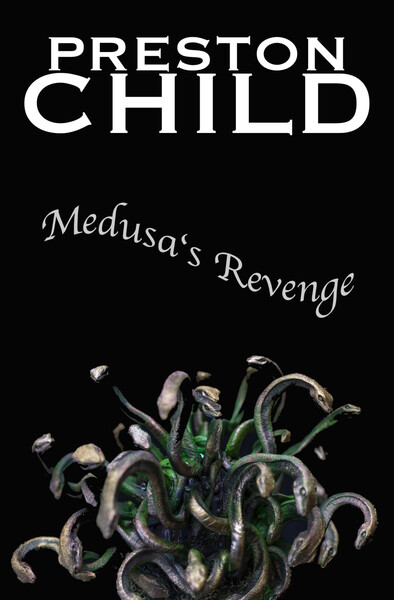 Preston Child asserts the moral right to be identified as the author of this short story.

Three teenagers are setting out to conquer the cliffs of their hometown; an adventure that is taking them to the limits of their psyche; an adventure that is revealing their nightmares and secrets. Every yard in the rocky wall is bringing them closer to Medusa’s Revenge until they are suddenly caught in a struggle between life and death.

Will their friendship endure this terrorfying horror, or will it break them and at the end the next fatal victims of Medusa’s Revenge?

This short story is a work of fiction. Names and characters are the product of the author’s imagination and any resemblance to actual persons, living or dead is entirely coincidental.

The Gods have cursed her; have made her a shadow of her former personality; and yet she managed to maintain her beauty. She became the woman with the snake hair, who pondered for revenge on her tormentors.

In people’s dream she kept her former, seductive and dangerous personality, so that she could prepare her revenge unseen by everyone. Unnoticed by the Gods, she reproduced herself - so that her descendants could fulfill her revenge!

On a day so hot, that it seemed to suck the breath out of their lungs before their skinny bodies could use it, three friends from a nearby village decided to conquer the cliff.

After lunch the teenagers left their homes and wandered along a tarred road in silence until they reached the unpaved parking lot of Devil’s Corner, a rock formation that looked like a trident from the sea side. Long and steep stairs caved into the rock meandered down to the water and the beautiful sandy beach of the Devil’s Bay, at least during low tide. At high tide the rough and wild surf of the North Sea occupied the lowest steps.

They stopped at the beginning of these stairs and looked out over the calm sea; lonely and deserted the water mixed with the cloudless summer sky on the horizon. After a brief moment, each of them following their own thoughts, the boys threw mutually encouraging looks at each other and started descending.

A salty breeze blew towards them, sheathed them and cooled down their sweating bodies as they carefully walked down the rocky steps. Small, colorful butterflies fluttered around them and a honey-sweet fragrance from the nearby canola fields tried to seduce them. Somewhere from below, still out of sight, they could hear the  exciting shouting of seagulls.

The oldest of the three teenagers walked ahead, led the small group down the uneven, sandy steps without noticing that his friends were slowsly falling behind. As soon as they have brought a few steps between their friend and them, they stopped, whispered briefly, wildly gesturing with each other. Their eyes sparkled fiercly and their annoyed expressions revealed that they did not reach any suitable agreement in their dispute.

Tristan looked up and saw how his friend, who climbed diagonally above him, lost his grip and started to slide down the rocky wall. He unleashed a stoney avalanche. It was thanks to a narrow outcrop next to him where his friend was able to intercept the slide.

Although Tristan immediately moved aside, he could not avoid the tiny stone projectiles, that hit his body, tore bloody injuries into his skin. For a moment he wondered if he should give up his secure hold to protect his head; however, before he finished that thought, the avalanche subsided again.

With a sigh of relief Tristan pressed himself against the warm cliff while the rays of the midday sun burned on his maltreated, bleeding body. He closed his eyes and took a deep breath to chase the shock out of his mind. He could feel how his strength were leaving him.

Philip risked an eye downwards to see how far they already have come and when he saw the distance, he realized that they already had spent some time in the rock formation:

The North Sea already flooded the white sandy beach and the rough surf began to attack the rock formatiom. The dead, half-decayed swan, in whose rotten intestines numerous maggots lived, which they had discovered near the stairs, was already buried by the saltwater.

Disgusted by the foulest smell, they had examined the dead bird for a while but since nothing exciting happened, they quickly lost interest and continued their way to the cliff to find a suitable place to start their ascent.

Philip slowly let his gaze wander over the bay when the knowledge hit him with full force: the North Sea cut off their safe