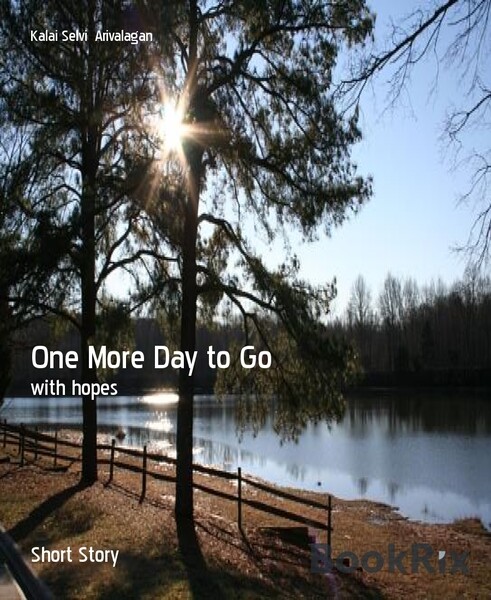 A day in the month of April, Kayal walked to the front gate of her house. The afternoon breeze blew hot and scorched her skin.

The surrounding looked barren and isolated. The whole place that always bustled with numerous activities was empty without a single person. The unavoidable power cut during the day did not allow the machines to run and the factory looked lonely without any employers. The power cut announced during summer days shifted the work time to night and the factory came to life after 10 pm every night.

Life during summer was dry and weary. Along with power cut, water scarcity made their life tedious. The water in the well went down as there was no water from the springs. Earlier her father switched on the motor, filled the cement tank with water. Kayal cleaned the tank once in every month.

Drinking water was supplied on alternate days by the local municipal. As the municipal supplied the water for less than thirty minutes, her mother filled all the containers with the drinking water. They used the water stored in the cement tank to wash their cooking vessels, their clothes, to take bath and to water the plants.

Kayal’s father helped her to lift the water from the well. He would fill the plastic pot with water and she would carry it home. The distance between the well and the built tank outside the toilet took minimum three to four minutes to walk. When her father was out of town, Kayal went alone to lift the water from the well. Every pull of the bucket filled with water stressed her hands and made her feel out of breath. Drops of sweat on her forehead glistened in the morning sun while she walked home.

A wiry fence separated their land from the polytechnic institute on the other side. Tall, bushy plants and trees planted on the either side of the fence made a perfect curtain to hide the land from others. Young students studying in the institute played basket ball or throw ball during evening hours. While she walked toward the well, she could hear their voices. But she never stopped there to watch their game.

All the plants around her house looked dry and yearned for drops of water to freshen their leaves. Kayal’s mother asked them to wash their hands after eating food or wash their face near the plant, so that they could keep at least the soil around the plants with some moisture.

The big, yellow colored moon rose slowly high up in the sky. Kayla looked at the thin strips of clouds that slowly moved near the moon. The cool, white beams of moon light stretched across and lit the place. She could see the bright Venus at the lower horizon that smiled at her in brilliance.

‘Kayal,’ her mother called her from inside. “Come with me. I am going to St. Antony’s church.” Kayal followed her without any question. Both of them walked to the church in silence. Every Tuesday, they went to the church and waited in the queue for their turn to pray. Two men at the church prayed for them. Kayal closed her eyes and listened to the mumbling prayers from the men. They placed their right hand on the top of the head for a few minutes and told them how it would be in the coming days.

Whenever Kayal went there, a big question came to her mind. “Will these men be able to tell what I am thinking now?” She always wanted to know. Thousands of questions that needed immediate answers went across her mind. But she did not have the guts to ask them those questions. The candles lit in front of St. Antony’s statue flickered in the evening breeze and their warm rays helped Kayal not to feel the cold evening breeze that blew from the hills nearby.

The shrine was small with a roof made of hatched coconut leaves. A bright tube light at the middle of the hut lit the place. Kayal and her mother stood in the queue waiting for their turn. When Kayal’s turn came, the man lifted his right hand and placed it on her head. With his eyes closed, he started to tell the usual prayer.

After the prayer, he spoke to her.  “You will have a surprise at the end of the week. Though you may have some problems related to your monthly cycle, things may happen as you wish”. Kayal could not help smiling and walked out of the small place with some expectation.

Probably, people consider it as the prediction or advise that came from the divine force. Whatever they told were just something to listen and feel relieved at heart. Though Kayal did not believe in all these things, she accompanied her mother for her sake. Both of them reached home after 30 minutes. Kayal helped her mother to serve the dinner and clean the kitchen.

“Akka, do you know, Appu will be going away.” Kayal’s younger sister spoke loudly as if announcing the news to a wide gathering. Without lifting her head from her book, Kayal asked her, “Why, what happened?”

“His younger brother is not well. He is admitted in the local hospital. He will be leaving for his home today night.” Kayal’s sister looked at her sister for any response. But Kayal did not reply anything to her.

“Akka, why are you silent?” She asked Kayal again.

“What do you want me to do? It is none of my business.” Kayal replied her curtly.

“He told me today in the evening.” Kayal frowned at her to stop further conversation.

The next day dawned as usual. Kayal filled the cement tank with water. Suddenly, she heard some sound from the municipal tap. She could hear the sound of air from the mouth of the tap. If they hear the sound of the air that moved through the empty pipes that connected the tap to the local water tank was a sign to tell that they would get the drinking water supply within ten to twenty minutes.

“Amma, today we would get the water. I heard the air coming out from the tap.” Kayal shouted to her mother who was busy in the kitchen.

“Keep the water tank clean and fill it with the water. Fill the pots first with that water. After filling all the vessels, fill the tank. Then allow people to fill water from the tap.” Her mother shouted at her.

Already her neighbors had left their plastic pots to be filled with water. When the water gushed out of the tap, Kayal shouted with joy. Her younger sister came running from the house and helped her to fill the container with water.

Kayal then filled the plastic pots left by her neighbors. After filling the pots, she watered the plants in front of their house.  The first streak of fresh water added moisture to the soil and the fresh fragrance of the soil filled the air.

“It is so nice to breathe in this fresh smell of the soil.” Kayal enjoyed it for a while.

It was already thirty minutes past six o’clock in the evening. Kayal looked at the bunch of jasmine flowers that started to bloom on the creeper that spread across the pomegranate plant. Usually she plucked the buds to make the string of flowers. That day it got delayed as she had to fill the water that was supplied only two times a week.

The fragrance of the flowers floated in the air and reached all the nooks and corners of the house. Kayal loved to have strands of those flowers on her hair for that made her hair fragrant. The enveloping dark curtain of night reminded her of the days ahead.

Something at the corner of her heart told her that life could become a struggle for none of the alliance clicked for her. Whatever that clicked for her on paper did not click in person. When people met her in person, they preferred her sister to her.

Somehow they felt she may not be a suitable match to their sons for she looked thin and puny. Bones made up her figure and no one had the time to admire her wit or her narrow, small hip that could fit in within two hands. They were more worried about her capacity to produce off springs and help their family to expand to the next generation.

Kayal looked at the brilliant Venus on the eastern horizon.

‘One more day to go, I will meet my love heart.’ She told again and again to control her tears.