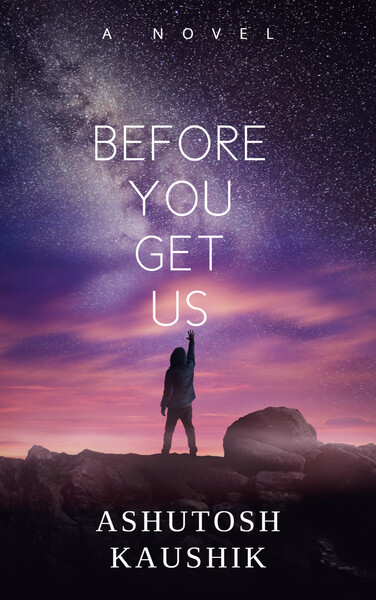 This Book Is A Work Of Fiction. I Made It Up.
Neither Novels Nor Their Readers Benefit From Attempts
To Divine Whether Any Facts Hide Inside A Story.Such Efforts
Attack The Very Idea That Made-Up Stories Can Matter, Which
Is Sort Of The Foundational Assumption Of Our Species.

I Appreciate Your Cooperation In This Matter.

Before You Get Us Is A "NOVEL SERIES".

"It's the end of a path, where I started you on."
-BEFORE YOU GET US

BEFORE
YOU
GET
US

HIDING IS NOT AN OPTION

Eyes opened
They were glaring; her eyes were charming and brighter than the winter moon. Lips were so soft, hands were so tiny,

her ankles it was like 10 times smaller than me and I thought usually when babies are born they cry at first but somehow she was happy to be a part of this little crazy world and like all other babies she was her father’s princess, her mom smiled looking at her father "Harry" a satisfactory smile and now the other thing was to decide the little one’s name.

There were whispers all over the room, everyone was trying to give her a unique name, her aunt opened a dictionary of names for that little one, But then a voice came behind from a man “Emma” the voice was of Harry’s best friend Brian Jackson after hearing the name, the little girl just smiled, god she was a perfect example of loveliness, everyone liked the name, whenever anyone said Emma she just smiled looking at everyone.

The doctor came into the delivery room with a report in his hands,

he was a little bit tensed, Harry asked ”everything all right doctor.”

he wanted to say something but was hesitating to say the problem thinking about all those happy faces that were present in the room.

Everyone was looking at the doctor saying “tell us, doctor, why the long face”;

he replied looking intensely at Harry “can I have a minute with you outside ”.

Everyone was now worried a little bit no one knew what was going on. Harry got out of the delivery room saying “it’s nothing actually don’t worry”, just to calm them down but Harry was worried from inside.

When he came out he looked tensed a bit he said:” yes doctor ?”.

Doctor Jensen held his head down and said "I am sorry Mr. Harry but it’s nobody’s fault",

maybe he was comforting him because of the news that he was just about to give him.

Harry said with anger “stop freaking us all out doctor and just tell us the damn thing, what the hell is going on”.

He replied “Sir, your daughter is mute, she cannot speak, unfortunately, her vocals are damaged and we are not been able to figure out why? It didn't happen just now it is by birth and there is no way we can figure this out. I’m sorry."

The doctor did his job he put his hand on Harry's shoulder and said, "It's going to be alright sir, don't worry".

Harry was still, there were no expressions on his face. He did nothing, didn't even move.

The doctor asked” are you all right?

He replied, “yes I’m fine to thank you”.

He slowly went into the delivery room and it was obvious for everyone to ask about what the doctor said,

He did not want to say anything after seeing Emma’s face, but he somehow found the courage to tell her and said ” Jane I promise whatever happens but no matter what, we will always be there for her smile”. Jane replied, “just stop this and tell us what is going on here what it is”.

He replied,” our Emma is mute Jane, she is mute she won't be able to speak and the doctors are not sure why it happened to her." Harry was shivering to tell this.

Everyone just shouted except Jane “WHAT” and yeah why not, why won’t they.

They all didn’t know what to do,

how to react or say anything,

they were all baffled.

Jane said nothing, she got up from her bed and came near her daughter,

“We promise” meaning Jane and Harry.

Jane took out a bracelet from a knapsack and put it in Emma’s little wrist.

Jane said looking at harry " this bracelet represents that we will always be there for her no matter what”.

Harry came close to her and tightly hugged her and said "We will".

But no one wanted to be sad on this day because after all,

Hey! they had a baby girl, they got out of the hospital with happiness on their faces but no one really was deep down they were all saddened, but even though they passed that moment through after all they were bringing their princess “Emma” to her home.

Brian took his train to Haumea. Aunt Cassie and Emma’s uncle went their home in town and that little baby girl went to her mansion, well actually Harry was the project officer of Europa and was the head of Europa development department. So yeah it's pretty obvious that he had fame, money, and power.

Emma was getting familiar with things that were strange for her. Her weakness was never been felt by her parents. Jane gave up her job to raise her child in the best way she could, to make her strong in every situation. It was grueling for Harry to do his job and take care of Emma at the same time because of the workload, but he did his best.

To sum up, everything was going exactly the way it was planned, even when what happened with Emma. They just accepted it and moved on with that.

On 10th October a call came to Harry‘s house, he answered: “why now”.

He was talking to his ex-wife "Carol Stane", who was now living in Morris after Harry and Carol separated.

She replied, “can’t you even talk normally for one second; you had a daughter right, so I just called you to say congratulations for your little one”. He replied, “ why do you care so much huh?, later back then you don’t even want to have kids and now here we are, I completed my family and you got nothing, except your damn ego."

Carol put her phone down and ended the call.

Jane came downstairs and asked him “who was on the phone and why were you shouting”.

The whole family sat down to have dinner and the next grill rolled up from Jane’s mind was how they are going to understand her, how will she tell us her feelings, how is she going to talk.

The only solution was chirognomy,

Emma was now big enough to learn, they got a tutor who taught her Chirgnomy well. Emma was a fast learner, she became skilled at chirognomy and gradually she was been able to tell the exact feelings and what she wanted to say, her mom and dad too slowly but surely began to understand her. She was being able to talk without being talking and after a long time, there were happy faces in their house.

Slowly time flew away,
Emma was 10 now, she finished her special pre-school and it was time for her to go to school.

She was now a grown-up kid who was ready to understand more and to discover more. She got admission which came under the category in top five schools of Europa,

it was "Oxford Junior High School",

her parents were proud, they were fulfilled and they never thought that after all this, it was going to happen you must have seen the smile on their faces. Harry gave all the credit to her wife who made her remarkably achievable in her life,

who gave up her job for her.

It was time for Emma to go to school for the very first time,

Emma was very excited, she just could not wait anymore. Emma got dressed in her school uniform,

she was looking pretty. Everyone was ready to drop Emma at her school.

They were getting out of the house but abruptly Harry’s home landline rang; Jane picked it up and replied “who’s there”.

It was Brian, his voice sounded like he was in urgency and said “put Harry on the phone”,

his voice did not sound well, Harry asked “what happened buddy why are you tensed, everything all right ?”,

he replied “no, nothing is all right, everything is just messed up and I don’t know what to do”,

He replied,” why what the hell is going on”.

Brian said “I don’t have much time, just see the goddamn news.

Harry turned on his T.V,