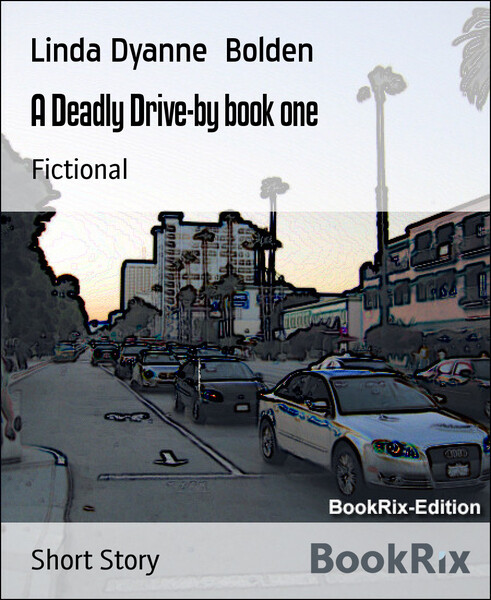 A Deadly Drive-By book one

The beauty of the sunset had descended slowly behind the building in front of us. The glow from the sun was becoming a twilight, disappearing below the horizon. I wanted to hold on to this moment forever, not taking the spectacular view for granted. There was not a cloud in the sky. The lakefront air was blowing hot breezes our way. Laughter had overflowed our surroundings, while the five girls jumped in rhythmic beats with their rope--the boys took turns riding their scooters from the apartment building to the corner of the block.

The parents were sitting on the porch singing along with the music to Michael Jackson’s CD, "Off the Wall." Others stood nearby engaged in their conversation as they watched their children happily play. From a distance, the musical sounds spilled out from the ice cream truck, moving along, and pauses mid-section in the street. A crowd of children ran toward the ice cream truck to treat themselves to their flavor tasty ice cream cones.
Everyone in the neighborhood were outside enjoying the first day of the hot summer heat, dreading to go inside his and her scorching apartments. Although, they could have chosen to go inside their apartments and relax under their air conditioning or fans, but the joy of the evening air was much more soothing. The evening was beautiful and everyone was enjoying himself or herself.

Suddenly a Blue 2007 Chevrolet speeded rapidly around the corner of our Southeast Side 70th Street block. The tires on the Chevy squeaked as the car came to a complete stop. Crammed in the seats were black teenagers. They rolled down their right side windows and fire off shots--boom boom boom... loud banging, sounds off. Bullets flying maybe three or four times I cannot remember, as the gunshots circulated in mid-air of the building's front entranceway. Then the Chevy quickly sped away.

The children and parents were screaming, barely acquiring time to duck from the gunshots, a sound they had become accustomed to hearing. It was like a very loud firecracker. The Parents were running looking for their children; the children were running and crying with terror-struck faces.

I was at a complete standstill in shock, and then I saw a pool of blood on the concrete of the pathway and little Tanisha laid still at a distance away from my feet covered in her blood. My moans were very intense now as I knelt down at her side. My tears temporary blurred my vision, my heart was beating profoundly fast, and my hands were shaking endless out of control because I did not know what to do at this point. "Oh my God Tanisha is shot y ’all,” I cried out.

Tanisha was seven, a precious little angel, light-skinned complexion. Her long brown hair was in ponytails and covered in blood. Her four yellow barrettes separated alongside the hairline, keeping her hair in place. The bullet wound in her head gushed out blood, dripping down her neck and staining her yellow t-shirt.

I heard voices over my head crying out in fear and someone yelling "call the police,” a man's voice said rushing to our side, and others were asking in unison, “Is she alive” Is she alive?” Their shouting penetrated my eardrum.
My stomach became nauseated as I let out a sigh, but before I could actually take deep breathes. I heard another scream coming from the curve-side, a mother’s scream.

“Oh-my God, my son is shot. Somebody please help meeeee” “My baby is shot.” She repeats for clarity this time. Her sobs were devastating, and some of the neighbors in crowd rushed immediately to her side. My eyes stayed filled with tears. I tried with my right hand to wipe the heavy tears away but my hands were trembling. I moved in closer to see if Tanisha was still breathing, before I could check her pulse, her mother pushed through the crowd yelling from the top of her lungs to get to her child side. “Is that my Tanisha? Lord, is that my Tanisha?” Her eyes were bloodshot with an expression of disbelief and horror-stricken. Tears were pouring down from her eyes. Her hair was matted down to her head; she was wearing a torn gray t-shirt, blue jeans and flip-flops.

Where had she been, I pondered on the thought because I did not see her out here with the other parents while their children played. Kids Tanisha’s age should always have an adult watching over him or /her at all times. Nowadays’ anything can happen to kids unsupervised.

You could feel the sadness growing amongst us, darkness closing in on everyone; we were caught off-guard, wondering how a pleasant evening had turned into tragedy. I felt disgusted listening to the sirens roaring from the ambulance and the police officer's vehicles driving up one behind the other with their bright blue lights flashing throughout the street.

The police officers jumped out of their vehicles one-by-one clearing the crowd away, leaving a pathway for the paramedics so they could move through with their stretchers, med-cases, and equipment. All of the police officers were asking the adults questions about the shooting and taking notes on their pads. They had blocked off the streets from the east and west ends of the corner. Meanwhile, the paramedics were working with the two children, carefully moving the children onto the stretchers. Everyone was worried about the two children and pissed off from the immoral behavior resulting in bloodshed and injury.

I stepped away from the crowd for few minutes trying to get back my bearings, closely observing everyone’s movement. I heard someone say that the little boy, who looked to be about nine years old, would be fine, and he had a flesh wound in his upper left leg. Some of the other kids had suffered scrapes and bruises from their falls on the pavement, and their parents consoled them and quickly escorted his or her child into their apartments. I could see Tanisha’s mom, whom was in a state of panic. Two neighbors were holding her up for support and comforting her because she was on the verge of collapsing. She could not control her sobs, while the paramedics thrust on Tanisha’s chest, working hard to get her heart beating again.
The humidity was unbearable, my face and head was drenched, covered from my heavy sweating. My stomach had balled-up into knots. I silently prayed for Tanisha and the little boy.

The delightful sunlight had faded entirely away, as I stood feeling lost, confused, miserable, outraged, and appalled from the hopelessness of this violent behavior.  All of this had happen so fast I couldn't remember how much time had passed us by. My heart went out to both parents. This could have happen to one of my children or even me for that matter. These young people who committed these hideous crimes never take the time out to think about the consequences of their actions and the effect on innocent victim’s families. Where is the hope for our future generation, if they continue to kill each other day after day? Perhaps they do not care and do not have respect and/or value the life of human beings, which is devastating and catastrophic.

I did not know this little boy, who suffered the injury to the leg, although I knew Tanisha, she played with my next-door neighbor’s kids. My next-door neighbor has twin girls the same age as Tanisha and the three girls spent many days playing on the front porch with their toys. I gave them candy all the time when I saw them outside. The little boy name was Darnell; he will have a chance to live a full and healthy life once he returns home from the hospital. Hearing the report on his condition brought some relief to me; however, I had become sadden concerning Tanisha. Although this was our first day of summer, a day the parents and people in the neighborhood would never forget; sorrowfully and regrettably, this was the last day of Tanisha’s life.

Dedication:
Dedicated: To all children, who have loss their lives in violence and/or became victims of drive-by shootings in their neighborhoods because of gang retaliation…