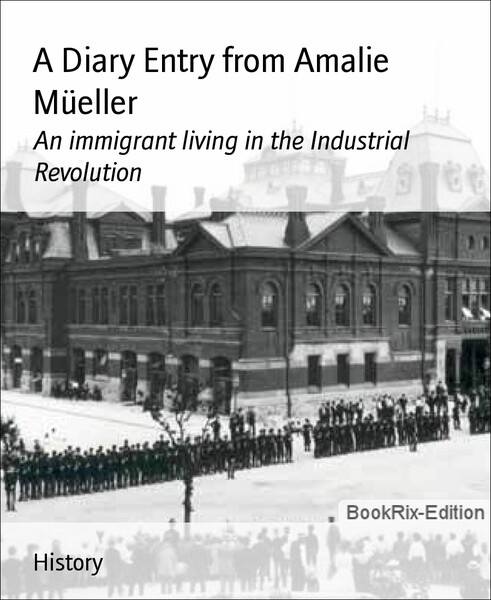 As I have not written for a very long time in this diary, I will recount what has happened to me in the past six months:

The move happened so fast. Papa told me that he wanted to move to America! He wanted to be in a free country where he could pursue his dream of becoming an entrepreneur in California and be able to finally make enough money for us to live with plenty of clothes and enough food to feed us three times a day. Three times a day! I asked him what an entrepreneur was, and he said that an entrepreneur was someone who had his own business. I could see that happening; Papa opening a shoemaking business and being free to do with it as he wished. It was a perfect dream.

After moving to America, it seems the immigration was not as “glorious” as I had hoped it would be. We could not afford to go all the way to California; instead, we moved to Pullman, Illinois. Both Papa and Mama both decided that, after moving to this country, that we should change our names to sound more American. I asked Papa why he wanted us to do this, but he did not answer me and simply waved me off. Now, I know Papa loves me, but why would he need to hide this from me?

Shortly after the move, Mama told me that, because we were from another country, that we would not be able to make as much money as others, which meant that all four of us, including little Hans, who is only seven, would have to work in the large looming factories in the city. I was very confused by this news, but I new that complaining about it would not get work done.

I soon came to find work at a textile factory. The building itself was large and full of steam-powered machines. Mama told me that steam-power was what drove a lot of machines today, like trains. I learned that factory labor is oftentimes harsh and demanding of me, but I bore it, for at the end of the week, I received my wages, or payment, which immediately went towards feeding my family. The factory I worked at also hired Hans and Mama, but they work different jobs than I do and I hardly get to see them with the exception of home. Papa went to go work at a coal mine, and since his day off is different than ours, I don’t see him at all.

Even as I write now, my hand begins to cramp. Bending over and working mindlessly for hours has made my back sore and my hands rough. Working ninety hours a week every week since I got a job has done such horrible things to my body; I now hobble instead of walk; I slouch because I cannot stand strait. But that was not the worst of my disfigured self.

It was a normal day at work, and I was working as fast as I could that morning, for the manager had raised the quota for the day. While he walked by (he often walked around to check our progress) I turned to watch him. I was not paying attention to my hands, and my right one became caught in the machine. Oh, what pain! I can still feel it now! I jerked and pulled as hard as I could to get my hand out of it, and eventually, the machine was stopped so I could free my mangled appendage. Luckily, though, a very kind surgeon who lived near the factory was able to save three out of five fingers.

The manager didn’t seem very pleased by the “inconvenience” my hand caused, and he whipped me for it. He told me that was what I got for not paying attention. I had expected my quota to go down because now my labor was not as efficient, but nothing happened; if anything, my quota kept going up. And meanwhile, I kept wishing I was back home overseas. I have noticed that some of the immigrants like me are not treated well, but then again, all of us working at the factories are not treated well.

I am pleased to say that I have also made a new friend here in this country. Being away from my old home, school and country had made me lonely and I felt out of place. That was, until I met Grace. She is a nine-year-old American girl who works in the factory with me. The day I met her was when the manager made her an another girl, who originally sat next to me, switch, and I introduced myself. Grace is a kindhearted soul, and is a light in my time of darkness here. We talked often, especially during lunch hours, and we soon discovered that we lived a short walk away from each other.

One of the other things Grace told me, was that she wished that the Cottage Industry was still running. I asked her what that was, and she explained to me that before all the big factories were made, people stayed home and made their own products to sell. She also told me that she herself had lived on a farm and her mother was part of that industry, though they moved to the city because it was “urbanizing”, as she called it. I was surprised by this, after being around machines and factories all my life, and told Mama what Grace said. She said this was true, and that for a short while, she herself had been in the Cottage Industry. I never knew I could’ve learned so much from a girl three years younger than me.

After meeting Grace, nothing much happened to me at the factory. I tried to work my hardest, but the hot, stuffy room I work in, my sore back and my hand made it hard to stay sane. I heard whispers here and there by workers that said that without us workers, the factories would be nothing. People started getting angry, and before I even realized it, were revolting. They went on strike, and though I did not participate in it, the factory let me go.

I trudged home that day to find that Mama, Hans and Papa had also lost their jobs. Without a source of money, we did not eat for a while. But, luckily labor unions, which were groups of people who changed how labor worked, gave Papa a new job with better working conditions and better wages. So much better that Mama, Hans and I didn’t have to work any more.

So that is my story of living in America so far. I know I have not even covered everything that had happened these six months, but I don’t intend to bore you with long explanations. I hope Papa will soon rise in his position at work, but for now, I am glad that he has a strong job and can take care of us.