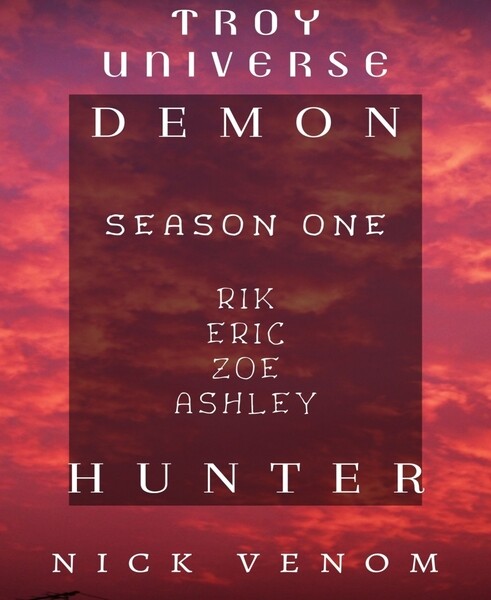 Rik stood in a pile of blood. Corpses littered the ground. All the corpses are demons’ bodies. One child watched in shock as she saw the bodies of her family on the ground. “Let’s go, Eric!” Rik shouted. “Yes, sir,” Rik said appearing from the shadows. Rik handed Eric his twin blades. “Return home. Call in Zoe for clean up!” He ordered. “As you say,” Eric said. He bowed before disappearing. The child slowly tiptoed back into the darkness. “Don’t think you can escape.” A voice said out of the shadows. Eric had his eyes on the child. “Master must have missed one. Well, I don’t believe he’ll be mad if I take this one for myself.” Eric said with a devilish hint in his eyes. He raised his trusty knife and plunged it into the child’s head, killing her instantly. He laughed as he cleaned his blade with his tongue. He licked the blood off and disappeared back into the shadows.

“Tomorrow we will clear the ‘High-Demon Dungeon!’ “ Rik declared. “We’re on our way to ridding the world of demons,” Rik said. “We’re here to serve you master. We will always support you!” declared his servants.

The four hunters made their way to the High-Demon Dungeon. Their plan was to exterminate the demons within the dungeon. Many dungeons like these spawned all over the continent. Within them are a range of monster. Slimes to goblins to orcs to demons to dragons and everything in between. Dungeons housing High-Demons were especially dangerous. With a high intellect, these demons can execute raids on nearby villages and towns with ease. That’s why quests were spread everywhere to gather adventurers to subjugate the High-Demons. That was one of the reasons the four hunters decided to challenge the dungeon. The main reason is Rik’s past.

“Sir, the demons inside are minimal. I would advise you to be wary of them. They are few in numbers, but they do have tough armor.” Eric said.

“Your goal is to take out as many of them as you can. The winner will get a reward. The losers will get a punishment. Now go!” He ordered. His servants rushed into the dungeon motivated by the mysterious rewards.

The three servants returned to their master’s side. “Who won?” Rik asked.

“I got four kills,” Eric said.

“Aw. I only got three.” Ashley said disappointed.

“Your reward is being excluded from training. While the punishment is double the training.” Rik said. Both Eric and Ashley shivered. Zoe danced around in excitement. Rik’s training course was rigorous and Spartan-like and it brought the three to exhaustion. Sometimes they would faint. That led to getting double the training.

None of the hunters noticed a presence watching them from afar. A man in his twenties dressed in gray watched the group with malicious intent. He got up after seeing “enough” and left the area.

Rik and his servants returned to the guild to cash in the rewards for the completion of the dungeon. “I have a warning for you. A group, known as ‘Angel’s Eye’, has been asking about you.” The receptionist informed them.

“All I know about them is that they are a rank D party of five members and they are considered one of the strongest rank D parties.” The receptionist said.

“Stronger than my party?” Rik asked.

“I would say that they match your strength. The only advantage they have over you is that they have an extra member.” The receptionist said.

“Thanks for the heads up,” Rik said. “I’ll be off.” Rik left the guild with his servants in tow. He passed by his inn and headed to the marketplace. He scanned the area overlooking for a specific item.

“What are you looking for master?” Eric asked.

“What does it do?” Ashley asked.

“If you don’t mind me asking this, master, but why do you need it?” Eric asked. “Couldn’t Ashley heal you.”

“She can, but what if we’re separated?” Rik asked.

“I would never leave your side!” Ashley shouted.

“It’s okay Ashley,” Rik said. He patted her head. She giggled. “But just in case something happens, then I would have this to help me.” He explained.

“Seems like something will happen,” Eric said. Eric lowered his face as he carefully listened for footsteps. “They’re hiding in the buildings around us. We’re surrounded by… four no five people.” Eric declared.

“Are they strong?” Rik asked.

“Yes,” Eric said. “Their strength matches ours. What do you wish to do?”

“Keep your guard up. Don’t strike first or we’ll be marked as criminals.” Rik ordered. Eric nodded. He whispered to Zoe and Ashley to stay quiet.

“You were so lively a second ago,” Somebody said. Rik turned around and noticed a human dressed in yellow and black. The mix of colors was painted on his jacket, pants, and hat. The same pattern of yellow and black swirls. His long red hair swayed in the wind. His hair reached his shoulders and his face was covered by a mask.
“Who are you?” Rik asked.

“What do you want?” Rik asked. Rik summoned his demon sword nicknamed “Zero” and prepared for chaos to run.

“Let’s see. What do I want? Oh, yeah, I want you dead. So, roll over and die a peasant’s death.” Glance said. His murderous intent leaked out to the point that Eric shuddered in fear.

“I see that this won’t go peacefully then,” Rik commented.

“I see that too.” Glance said. Four more people appeared behind Glance. Each of them different from each other. Two females and three males in total. The only thing they had in common was the stupid yellow and black uniform. Aside from that, they looked and acted differently. Ashley and Zoe prepared for the fight. Eric smiled as he awaited the fight to begin. Rik stood and glared at Glance. The only thing that went through his mind was:

“This is my party, Angel’s Eye. Azo, Cole, Dante and Lucy are my comrades.” Glance said. He introduced his buddies who stood behind him in silence. One had a bow, another had a staff, while the other three had a range of weapons from swords to daggers to throwing knives. “Introduce your side. I would like to know your names at least before we kill you.” Glance said. Rik stared Glance down. He raised his sword.

“I’m Rik. They are my servants: Eric, Zoe, and Ashley,” Rik told him. “We are known as the Demon Hunters.”

“Thank you, I will remember your name, in particular, when I slaughter your group in front of your eyes.” Glance said with a deranged smile. He took out his sword and got into a ready stance. Rik sighed. He took out his sword and told his group to get ready for battle. Glance nodded once before running towards Rik. He swung his sword hitting Rik’s left shoulder. Rik flinched. The sword didn’t cut deep into Rik’s shoulder blade. Rik grabbed the sword by its blade and held it up. Glance started panicking. He applied pressure on the sword, but Rik was able to easily suppress him. Rik pushed Glance back. Glance’s comrades gasped as they saw Glance being overpowered by Rik.

“I apologize, Cole, you are not allowed in master’s fight,” Eric announced. One of Glance’s comrades ignored Eric and headed towards Glance. “I warned you,” Eric muttered. Within a second, he was now right in front of Cole. He slit his throat. Cole gasped as he struggled to inhale air. He fell to the ground with blood gushing out of his wound. He died within a minute. This left the rest of Glance’s comrades shocked.

Glance took a peek over at Cole’s body. His body stiffened up from the shock. Rik used the now panicking  Glance to get the advantage over him. He pushed him down and stabbed him close to his heart. His comrades decided to try to help Glance, but that plan was shut down by Eric. He got behind them and held them at knifepoint. He even forced them to watch as Zoe disintegrate their comrade’s body. They surrendered quickly. “Ashley! Heal him. Eric keep an eye on them. And Zoe I want you to disintegrate their weapons!” Rik ordered. His servants followed his orders effortlessly. Ashley healed Glance. Eric kept the three adventurers under his grip and Zoe got rid of their weapons. Rik grabbed Glance by his shirt and dragged him over to his comrades. He threw him. He then ordered for rope and quickly tied the four up. Glance now looking frustrated shouted at Rik.

“What are you? You’re not a human. You’re a monster!” Rik smiled. His smile creeped out everybody except for Glance. No, he was terrified at the smile. Rik’s answers scarred Glance.

“Burn heaven and unroot hell, because we are the demon hunters.”