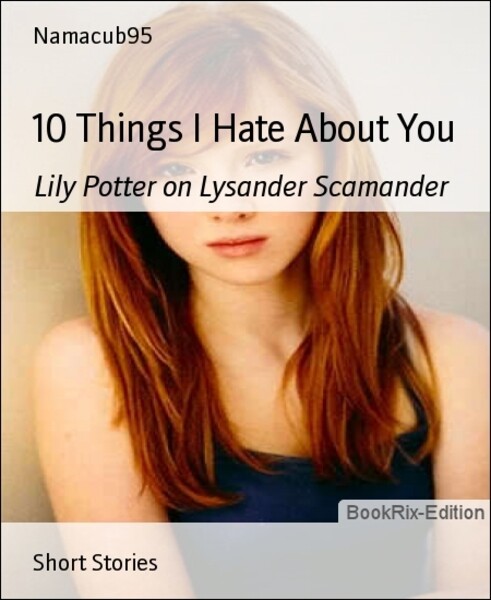 10 Things I Hate About You

You want to know why I, Lily Luna Potter hate Lysander Scamander? You really want to know? Well fine, I'll tell you. I've nothing to hide and I certainly don't care if it hurts his feelings, he has all of this coming anyways.

I hate how Lysander goes out with every skank in Hogwarts and then when he finds out their cheating on him, he refuses to believe it! What does he think this is? A sappy romance novel? Grow up! Life sucks and anyone who tells you otherwise is trying to sell you something. He's so damn stupid! Can't see what's in front of his own pathetic face!

I hate how Lysander will let Lorcan try out anything he invents on him. Jesus Christ! He would take poison if Lorcan asked him too! There is a little word he needs to learn: NO! His hair's now permanently dyed black because of one of Lorcan's spells and we've tried everything short of shaving his head to get it back to dirty blond again, it hasn't worked. Just last week he let Lysander transfigure him into a bird then Lorcan forgot the spell to change him back! Had to take the idiot to Madame Pomfrey! If I have to sit through another one of Madame Pomfrey's lectures on responsibility I'll shoot myself with that muggle gun Grandpa Weasley likes to take apart and rebuild.

I hate when Lysander tries to teach Hugo how to pick up girls. Poor Hugo, goes mute whenever he's confronted with a girl who isn't a family member. Lysander teaches him these stupid pick up lines like this doosy:

"Your ass must be jelly 'cause jam don't shake like that."

I fear for humanity if Hugo actually manages to pick up a girl with a line like that.

I hate when Lysander tells me he's really Lorcan in disguise. I've known Lorcan and Lysander since we were eight years old and even before the incident with Lysander's hair, I could tell them apart with only a sideways glance. For example; Lorcan's eyes are more silver than Lysander's, Lysander has a birthmark on the back of his neck that's sort of shaped like Mickey Mouse's head, Lorcan is slightly taller than Lysander the list goes on. What on earth gave him the idea he could pretend that he's Lorcan, it might have worked when I only just met him but it sure as hell doesn't work now.

I hate how sometimes during Quidditch practice he lifts up his shirt and wipes away his sweat just so he can show off his abs to the girls. Self absorbed much? What also irks me is that half the girls swoon over him.

I hate the fact that after all this nit picking, ranting, raving and snide remarks which should have ended our friendship long before, I still love Lysander Scamander. I hate how I think he's the one for me even though most days I can't stand being near him. It's infuriating how I get slightly nervous when he says he wants to 'tell me something' and then get really disappointed (although I never show it) when he tells me he's going out with whoever. It annoys me how sometimes I sit up imagining our wedding and our kids even though I know he isn't interested in me. Sometimes I like to imagine he dates all those girls because he's so deep in 'de nile' about his feelings for me that he's drowning.

So there's your answer that is why I hate Lysander Scamander. I hate him but I secretly love him. Hey, I was never going to make it easy for him now was I.