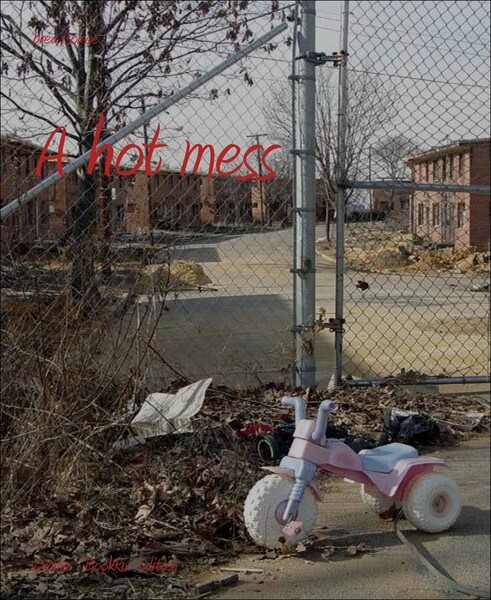 chapter 1 - Adriyel
I heard the gun shots from a couple doors down so i didn't move from my spot on the floor . They rang out : one , pause , another one . I wouldn't say i was scared though . i've had more guns pointed at me and have seen more guns fired than a fifteen year old should . But it's apart of life . Well , at least it's apart of my life .
" What you doin' in there girl ! " my mother banged on my bedroom door and shouted .
I was searching underneath my bed for my diary . But it wasn't there . That's where i had always left it so my mother couldn't get her grimy hands on it . If she saw half the shit i'd written in there it would probably be curtains for my ass .
" Open up i say , unless you want this damn door knocked down , " now that was my grandmother .
Grandma may didn't play either . She was twice as bitter and heartless as her daughter , my mother . she'd knock me upside my head in less than a heartbeat if i even walked wrong . Ain't that some shit ? !
They had something against me . My mama and her mama , they just didn't like me and i really couldn't figure that shit out ! I went to school everyday , came home every evening , cleaned up after that , cooked dinner every night , and if i had time i'd do my home work and get ready for school the next day . That shit wasn't cool , at all ! But i didn't have a choice so i kept my mouth closed and did what they said . But damn was that shit getting tiring .
I stood up , walked over to my door , unlocked it and it swung open .
" Who do you think you are little girl , " my mother rushed in followed my my grandmother " You are not grown . You get no privacy in my damn house unless i say so . "
And then it was my grandmother's turn " Bet not be no lil' boys in here ! I know that much . Unless you want a ass whoopin' . yo lil' fast tail runnin' around in short skirts and too little shorts . I'm your grandmother remember that . I run shit . Not you or ya mama . As long as i'm alive i got this . "
I just listened . My anger was rising by the minute but i some how kept my cool . Maybe knowing that if i went off they would both beat my ass at the same time with nobody to protect me .
I could feel sweat forming in my palms , Heat rising in my body , ringing in my ears .
I imagines just for a moment that i killed them both but , that could never turn out good . I thought of different plans , different ideas but they all had the same ending : me doing 25 to life .
I laughed at that thought , my pretty ass wouldn't last 2 days in jail .
"Oh you think it's funny ! ? , " my mother took off her shoe and swung it , it landed directly on the left side of my neck " ain't shit funny ! "
The left side of my neck stung like you wouldn't believe . But she didn't stop . She swung it 3 more times , all landing blows to my head .
I shook my head a little , the shit was hurting , bad . " You gon' punish me for your miserable childhood ? oh now , that's just crazy ."
They looked at each other and walked out the room . My grandmother returned a few seconds later wit my red notebook that i called my diary in her hand . She threw it toward me and i caught it " You called me a evil bitch in there . You called me the devil himself . you gon' pay . believe you gon' pay . "
The rest of the night was quiet . I took a shower and laid out my outfit for school the next day . I put out my journal late at night and began to flip thru it . That's when i realized every page had shit written on it like " you never gon' be shit " or " little bitch " .
I flipped to a clean page and proceeded to write :
dear diary ,
i'm fine , i guess . I'm alive at least . Do yo believe it ? they're mad at me for telling it like it really is ! what the fuck kind of stuff is that ? anyways , i keep thinking about the gun shots i heard earlier . I wonder who the target was and who really got shot because around here the original target is never the one who gets shot . . .


I drifted off to sleep .


chapter 2 - blue
"Come on baby please . "
After the police arrived and took away Lady's and Neo's bodies i was feeling horrible . Keshia was in the living room crying . I didn't tell her Neo caught me fuckin' lady and that's why he killed her and himself , i just kept my mouth shut and comforted her .
I kissed her cheek " baby , you gotta stop crying for me , it's not healthy for the baby . please . "
She sobbed " i cant ! Neo was like my own brother , now Lady i didn't care for her skanky ass . But , i loved Neo . You know that . I treated your brother like he was my own . He was our baby's god father damnit ! "
I held her in my arms and rocked her back and forth kissing her constantly to let her know it was gonna be okay .
Meanwhile inside my chest my fuckin' heart was damn near crumbling . My own fuckin' brother ! How could i sleep with his girl man . How ? ! He was all i had in this world and i fucked that up . If we hadn't have all moved into this house me and Lady wouldn't have start checkin' for each other and Neo would still be here right now ! It's all my fault . When our grandfather died and left us this house we should have just sold it and split the money . But at the time moving in sounded like a good idea . Damn !