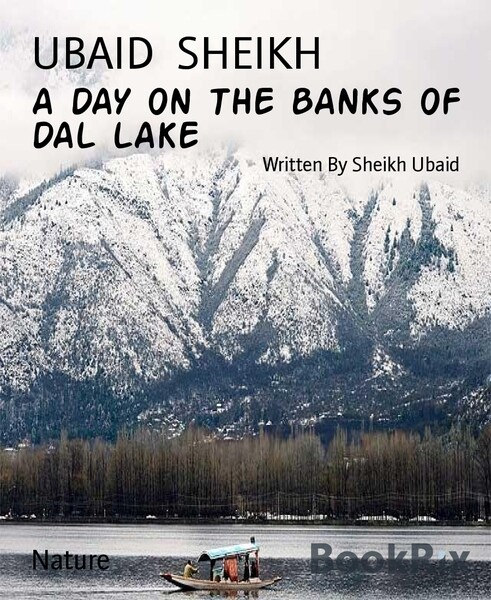 I wrote this story (ON THE BANKS OF DAL LAKE) for my family but when I began I hadn’t realized that imaginations grow quicker than reality. Nearly everything I have in it is, and it isn’t full. Excitements are in it and feelings & good thoughts of nature. I want to thank everyone who helped me for creating this book. I also dedicated this story to my wonderful readers and seriously I love you all. You know you pick up a book grazing by eyes to the dedication and you find that this book isn’t dedicated to you because the reason is we haven’t met yet.

“Once you make a decision, the universe conspires to make it happen.” Ralph Waldo Emerson"

“The ultimate aim of the ego isn’t to see something, but to be something” Dr.Iqbal.

“God our creator, has stored within our minds and personalities great potential strength and ability prayer helps us tap and develop these powers “A.P.J Abdul Kalam.

“Expectation is the root of all heartaches “William Shakespeare

I am writing this story on the banks of Dal-lake during winter every corner of lake is surrounded by mountains and every part is covered with blanket of snow. Or like the snow falls in the water, a moment white-then melts forever. My hands are freezing and my eyes fall in tears, and every minute I want to stop the moment and for that I am praying to God on this glorious moment ….Life., please don’t stop getting better now. My eyes float in the lake with the waves of the water .I choose to listen the sound of snow which falls in the water for a while, The sound of the water waves are like a song that never ends on the banks but in the hearts of those who have loved her.

On all sided snow on its banks…….Ducks swam in the water would be the finest possible tribute to me by nature, and a priceless gift for our children. I count myself fortunate with each and every passing minute on the banks of Dal-lake. Frequently I hear the call to prayer (Azan) coming from left side of the lake where there is Muslim shrine on the bank of Dal-lake simply named Dargah Sharief. I am surrounded by the call of prayers of Zohar coming from different sides echoed and the sound of Azan slips into the water seems memorable moment. In winter all the singing is in the tops of the trees where the wind bird with its white eyes shoves and pushes among the branches like any of us he wants to go to sleep but he’s restless he has an idea and it slowly unfolds from under his beating wings as long as he stays awake but his music, after all is melodious and joyful.

In the top of the Chinar tree he makes his nest I feel the bird was very clever he puts his glittering beak into the lake and take the green shrubs from it and makes the nest for protecting himself from clouds which he has summoned from the side of Himalayas which he has taught to be silent in the nest because it’s time to fallen heavy snow in the whole valley just like as white glittering of white diamond facets and when itself (snow) falls into the water the music which exists from that silently enters into the inner core of the heart . Thinking thoughts before joining with nature. If you’re not beside on Dal-Lake, close your eyes, and sit down beside an imaginary one, a lake where you feel comfortable & joyful. Know that water has wisdom, in its motion through the world, as much as any of us have.

AH! How can I describe the beauty rare to those who haven’t seen the memorable moments? Chinar leaves float in the water and on the surface of each leaf is lain a diamond drop of clearest crystal dew. Those Chinar leaves form a bed of diamond on the upper surface of water with lotus flowers. Fountains clearly glittering sprays drawn from the snows have never ceased to tribute their spell on all who had done this handwork of love. Alone I love to dream along the Dal _lakes willowy water-ways. O! The Dal –lake so beautiful O! The snowy mountains covered which dreams like fades to vision pale in far Dal-lake! The great mountains, pure water, snowy banks of I wounded lie in aching pain. How far Dal-lake! How far Dal-lake but when this pain comes to an end _My soul released_ because truly I am in heaven. At least it’s faithful to imagined views. I would like to decorate this silence of snowy moments on the banks of Dal Lake but when I opened my eyes I find myself in my own house and I burnt the fire in a pot when the heat goes on. I waited too long to drink my tea. But it was not hot. It was only warm because it’s snowy winter.

Come walk with me on the banks Dal-lake

Come walk with me on the banks of Dal-lake

We will sing and enjoy the nature of beauty

Come walk with me on the banks of Dal-lake

Where the memorable moments of nature shall be gained.

Dal Lake is known as the Jewel in the Crown of Kashmir. , Dal Lake is the most important landmark of Srinagar. A vast, mirror-flat sheet of water reflecting the carved wooden balconies of the houseboats and the misty peaks of the Pir Panjal Mountains. Painted shikaras skiff around the lake, transporting goods to market, and children to school and travellers from houseboat to shore. Dal Lake is lined by gardens built in the Mughal era and many parks. Mughals, who were smitten by the beauty of Kashmir, laid extensive gardens to heighten its beauty. The best views of the lake can be seen from the Shalimar Garden and Nishat Garden that were built during the reign of Mughal Emperor, Jahangir.

The Dal Lake has rightfully become an icon of the Kashmir tourism industry. A Himalayan urban lake, it has five basins and a number of channels that are well linked with each other. There are plenty of fishes in Dal Lake and fishery is the second largest industry of the region centered on the lake. The sparkling quiet waters of Dal surrounded by snow-capped mountains on its three sides undoubtedly mark it as one of the most beautiful lakes of India. It is also the second largest lake in the State of Jammu and Kashmir with numerous gardens and orchards all along its shores. Houseboats form an indelible part of the scenery of the Dal Lake that are always ready to take tourists to a romantic and peaceful ride of the lake and soothe their nerves as the houseboat floats over the slightly rippling waters. They also offer some of the most exotic views of the splendid scenery of the Dal Lake. The extraordinary, almost unearthly beauty of the Kashmir valley made it a strange conflict to cover. In the morning, the window of houseboat on the Dal Lake would be open, and one could easily see the reed cutters and fishermen. The shikara canoes would be in the foreground; behind were the bridges and waterways, the willows and poplars, and the orchards of apricots and almonds. There were children paddling in the shallows and girls carrying brush-wood bundles on their heads. Beyond stretched the old Mughal water-gardens and, above them, the mulberry trees of the silk farmers. Crowning all this were the jagged snow-peaks of the great Himalaya.

The Muslims of the Kashmir valley had long been known for their tolerant and heterodox Sufi faith. Sufism has had a great influence on culture and music of Kashmir. Sufiana Kalam is accompanied by santoor (Stringed musical instrument native to Kashmir), along with the tabla, sitar and harmonium. Sufiana Kalam has been popular in Kashmir since arriving from Iran in the 15th century and has been the music of choice for Kashmiri Sufi mystics.

Wazwan is the hallmark of Kashmiri cuisine. It is prepared on special occasions and served on large metal plate called trami. Each trami is shared by a group of four people. Some of important dishes are Yakhni, Kabab, Rogan Josh, Tabak Maaz, Gushtaba etc., Kashmiri and Muglia cuisines are extremely popular and served in almost all the restaurants. Srinagar is famous for its non-vegetarian delicacies like Rogan gosht, gushtaba, rista, tabakmaaz, kanti, etc. There are a few restaurants that provide tasty vegetarian meal along the road near Dal Lake. Seekh- Tuj is another popular delicacy found in the street stalls of Khayyam Road.

Winters in Kashmir are harsh. People carry Kangri (earthen pot filled with charcoal) underneath their pherans (Large over coats) to keep themselves warm or spend the day sitting in Hamams, which are constructed by raising floor height by a few feet. The flooring is made of stone and is heated by a fire underneath.

Kashmir is also known for its wooden works and Papier-mâché, both of which are on a decline like the once strong carpet industry of Kashmir. “The Arts of Kashmir,” was a superb piece of museum craft a beautifully realized display of the intellectual and artistic brilliance that had long distinguished the valley. It was not a show that highlighted one particular aesthetic; instead it was a celebration of how multiple influences and styles can coexist and influence each other within a single small but culturally vibrant region. One of the greatest early Muslim rulers of Kashmir was Zain-ul-Abidin (1420–1470), whose enlightened administration and artistic patronage are still remembered by Kashmiris today.

(Arise, O Gardener) and stresses upon his fellow countrymen to decorate their nation and land with flowers which symbolizing their apt traditions based on honesty, truthfulness and dignity.

Mahjoor through his immortal verses teaches lessons about nature, love, peace, unity, faith in God, upholding of human values, uselessness of strife’s, jealousy, hatred, and he also touches the psyche of the people by awakening their conscience and advocates the concern of the poor, downtrodden, and suppressed workers. He invariably teaches his nation to learn to live with honor and dignity and fight for their lost identity and freedom.

Dedication:
I wrote this story (ON THE BANKS OF DAL LAKE) for my family but when I began I hadn’t realized that imaginations grow quicker than reality. Nearly everything I have in it is, and it isn’t full. Excitements are in it and feelings & good thoughts of nature. I want to thank everyone who helped me for creating this book. I also dedicated this story to my wonderful readers and seriously I love you all. You know you pick up a book grazing by eyes to the dedication and you find that this book isn’t dedicated to you because the reason is we haven’t met yet. (SHEIKH UBAID YOUSOUF)