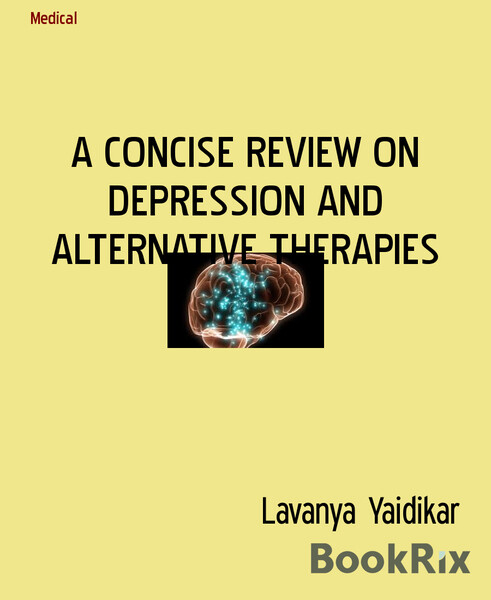 It my immense pleasure to spotlight the first edition of the book to the pharmacy and life science students who are working in the area of depression and alternative therapies.

Truthful efforts have been made to present a concise review on depression such as history, epidemiology, etiology, signs and symptoms, types, pathophysiology, diagnosis and alternative therapies of depression which is going to give a short and clear theoretical background for the researchers in the area of depression.

I am thankful to the management of Seven Hills College of Pharmacy for their encouragement and support to bring out this edition.

I am thankful to Bookrix Publishers, Germany for their support in publication of the book.

Any suggestions for the improvement of the book are highly appreciated.

Chapter 2 – History and Epidemiology of Depression

Chapter 4 – Signs and Symptoms of Depression

Depression is one of the most common psychiatric disorders with high mortality, morbidity and economic burden worldwide. Depression is considered as syndrome referring to a constellation of depressive symptoms and nosological category is a combination of misery and lethargy. Depression is heterogeneous disorder that affects ones mood, physical health and behavior. Patients with major depression have symptoms that reflect changes in brain monoamine neurotransmitters, specifically norepinephrine, serotonin and dopamine. According to International Classification of Diseases-10 (ICD-10) and Diagnostic and Statistical Manual-IV (DSM-IV) depression episodes are recognized as individual suffering from depressed or sad mood, showing loss of energy and diminished activity. Theoretical explanation of depression includes loss of interest, virtually in all activities, a significant reduction in productivity and negative impact on health.

Major depressive disorders have been traditionally considered as a neurochemical disorders etiologically. For decades depression has been linked particularly to disturbance in serotonergic and noradrenergic neurotransmitters. Major depression involves disturbance in emotional, cognitive, immune, autonomic and endocrine functions. Assessment of cerebrospinal fluid (CSF) chemistry, neuroendocrine response to pharmacological challenge, neuroreceptor and transporter binding revealed that depressive patients show abnormalities in serotonergic, noradrenergic and dopaminergic system. Emotional, cognitive, immune, autonomic and endocrine system shares neurotransmitters, peptides, hormones and cytokines as well as their receptor as a common language to communicate with each other. This interplay is important during stress response. Stressful events are the precipitating factors for the onset of depression. Dysfunction in the neurotransmitter levels result in the systemic effect with hyper activation of hypothalamic pituitary adrenal axis (HPA) besides psychological and behavioral consequences which result in hypercortisolemia causing a wide array of organ and immune changes. One among the affected part is hippocampus which expresses high number of steroid receptors, has key role in declarative memory tasks and many other cognitive functions.

HISTORY AND EPIDEMIOLOGY OF DEPRESSION

The history of depressive disorders is the experience of depression, has plagued humans since the earliest documentation of human experience. Ancient Greek descriptions of depression referred to a syndrome of melancholia, which translated from the Greek means black bile. In humoral theory, black bile was considered an etiologic factor in melancholia. This Greek tradition referred to melancholic temperament which is comparable to our understanding of early onset dysthymic conditions or depressive personality. During the late 19th and early 20th centuries, phenomenologists increasingly used the term depression or mental depression to refer to the clinical syndrome of melancholia. Emil Kraepelin distinguished mood which was dejected, gloomy, and hopeless in the depressive phase in manic-depressive insanity from the mood which was withdrawn and irritable in paranoia. In addition, Kraepelin distinguished depression which represented one pole of manic-depressive insanity from melancholia, which involves depression associated with fear, agitation, self-accusation and hypochondriacal symptoms

The National Comorbidity Survey Replication found that 16.2% of the population studied had a history of major depressive disorder in their lifetime, and more than 6.6% had an episode within the past 12 months. Women are at increased risk of depression from early adolescence until their mid-50s, with a lifetime rate that is 1.7 to 2.7 times greater than for men. Although depression can occur at any age, adults 18 to 29 years of age experience the highest rates of major depression during any given year. The estimated lifetime prevalence of major depression in individuals aged 65 to 80 years recently was reported to be 20.4% in women

Dedication:
Dedicated to my Guide and my family members.