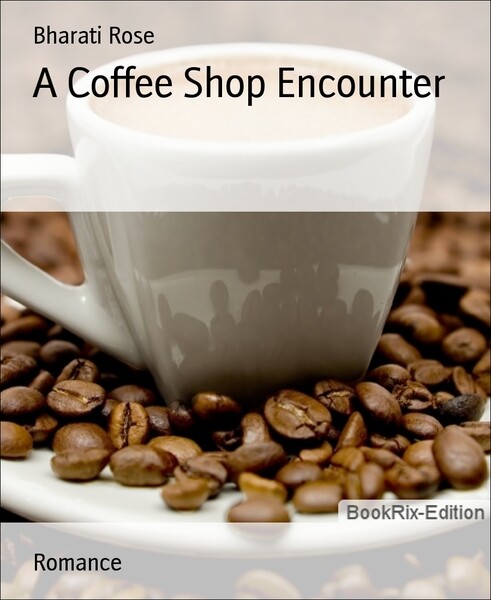 She wasn’t from here. Her accent gave that away. I wondered if she was Persian or Indian perhaps. She had an oval face, with wide, doe-like eyes hidden beneath lush dark lashes. She had a honey-dusk complexion, with spots of brown adorning the bridge of her nose. She had a very small stature, but was unusually tall, like an Arabian horse. She was both slim and curvaceous. I couldn’t make up my mind if I thought she was pretty or not.

She always sat at a corner table at the back of the shop. I knew her order backwards and forwards. Every single day it was the same order of a tall French Roast, with two sugars, and two creams. She seemed to like routine.

Her demeanour portrayed her as shy, and reserved. Many times throughout the workday, while serving coffee to patrons, thoughts of approaching her to start a conversation would cross my mind. Yet what would I say? She was a complete stranger to me. For two weeks, I did little else but watch her. My eyes trailed her wherever she went. Today I had made up my mind to introduce myself.

She stared intently at a newspaper as I approached. Her eyes flickered through the pages caressing each line in passage.

“Would you like a refill maam?” I managed to sound composed, despite the slight tremor I felt in my vocal cords. She glanced up, focusing her eyes on me. She attempted to smile, but it faltered at once.

“No thanks.” Her tone held a note of finality. She wanted me to leave. Yet my legs stayed rooted to the linoleum tiles. I wasn’t ready to face such an abrupt dismissal. My throat felt dry and my lips parched. I could not muster up anything to say either. I dragged my feet to the nearest empty table and started to wipe it down.

That was when I saw him for the first time. A big brown man in his late forties, who was muscular, with a beard and a heavy moustache, walked into the coffee shop and headed straight for the table that she occupied. My gaze shifted to her face. Her face revealed nothing. I couldn’t help but move closer to observe their exchange of words. Somehow this lady, who appeared to be in her early twenties, had captivated me in a matter of days.

“What are you doing here?” asked the man of the lady. She did not reply, just simply stared at him blankly. He persisted to engage her in conversation. His words held an authoritative tone.
“Don’t you dare be cheeky with me young lady. Answer me.” He grabbed her arm and pulled on it firmly, thrusting her forwards from her seat. Attempting to free her arm, she winced at the physical pain his iron grip on her arm caused.

Standing by the table, I contemplated intervening. He was twice my build. He could probably hurt me if he had the mind to inflict harm. I convinced myself to avoid meddling in their affairs unless things turned real ugly. Besides, I had not an inkling of knowledge concerning the relationship that existed between them. He wore one of the most contemptible expressions I’ve seen to date, while his face looked as if it would curl upwards in anger more often than not. Could he be her elder brother, maybe even her father? What if he were her husband? That couldn’t be it right? He would be twice her age if that were true. Nonetheless, I had heard stories from Nita, another employee, that such things were commonplace in India. If she was Indian, he could very well be her husband. I hoped that wasn’t the case. I didn’t know why but I wanted that to be untrue.

After that incident she had stopped frequenting the coffee shop. I felt as if I’d lost a part of me with her departure. Nothing had changed in my nature but yet I felt dissatisfied with life in general. I had worked my way up from being a barista at the coffee shop to its owner. The coffee shop ran operated smoothly with the usual customers. Yet somewhere in the back of my mind I hoped that she’d reappear in my life, would simply walk through the revolving doors of the shop and order a French Roast. I wanted an opportunity to speak with her, to see where things would have led with us. I waited for such a day.

When that day finally arrived, I was less than prepared to see it through. I was working behind the counter when the jingle of the chimes Janice hung over the doors caught my attention. There she stood. I nearly did not recognize her. She looked so different. She looked to be only a faint shadow of her former shelf. Dark rings circled her eyes, and she had loss even more weight. Her eyes looked restless. She had a year old child nestled in her arms. I exhaled, trying to release the tension that wracked my entire body. I could not believe my eyes. He was there too, right behind her. He had a potbelly that protruded in front of him. He had lost a substantial portion of his hair. The little hair that he did happen to have took on a pepper and salt effect. So he was her husband after all it seemed.

I couldn’t help but feel envious of him. I had once admired every single aspect of her from afar, like the way she tucked the loose strands of her hair behind her ear with two fingers or her habit of twirling a pen between her fingers while she tackled crosswords. I had watched her every single day for a year almost, and had drunk in the sight of her shy smile as best I could. Yet this woman did not smile, and her eyes looked haunted. What had this man done to her?

I watched as he led her to a table close to the counter. As they got settled he left for the loo. A few students sat near their table. The seemed like a jovial group, perhaps tourist even. A young man in the group took out a Nikon camera and started to take snapshots of his friends. Her eyes were concentrated on them. She didn’t even blink. Whether her gaze drew his attention or whether it was coincidental I did not know, but he turned to face her and winked. Her face remained expressionless.

The young man got up and walked towards her and the baby in her arms. I moved from my place at the counter and edged closer to listen.
“If you don’t mind, may I please take a snap of you and the baby? I’m collecting photographs for my portfolio and would really appreciate your help. If you give you me your email I’d be able to send the shots to you too, if you’d like”
She looked pensive. Then she nodded.

“You have my permission to take a picture of the baby, but please do not photograph me. My husband will not approve.”

The young man nodded in response and focused his camera on the baby. At the exact same moment I turned to see her husband at the entrance of the loo, glaring fiercely in her direction. I swivelled my head around to observe a quick flicker of genuine fear in her eyes. She was afraid of him. The expression vanished almost instantly and her face turned blank once more. It was as if she veiled her fear from him, to avoid showing any vulnerability. It reminded me of the bluffer at the poker table who pulls a poker face, hoping the odds are not against him. I wished I could erase her pain. I wished I could experience that pain in her stead. Yet what could I possibly do?

As I lost myself in my thoughts, out of the corner of my eye I watched him seat himself across from her. The young man who had taken the photo had returned to conversing with his mates. She sat in her seat rigidly, head bent down, not meeting his unfaltering gaze. He took her hand then. To the passersby it would appear like an act of affection, but she and I both knew better. He clasped her hands between his tightly and bent slightly to whisper something in her ear, so that she alone could hear. Her expression changed then. It was that flicker of fear again, and this time it remained for a longer time.

Someone shook my arm beside me. I felt irritated by the disturbance. It was Janice. She looked at me strangely.

“Lost in the clouds again Luke?” she asked.

“Janice can you do me a favour.”

She stared at me intently for a while and then nodded. I pulled her by the arm and dragged her into the staff room. Seating myself in front of the staff room’s only computer, I googled the contact information for nearby women’s shelters and helplines. I scrawled them on a napkin and thrust them in her hand. Pointing at the woman who had encompassed my thoughts for the past two years, I gestured for her to deliver it to her discreetly. Wordlessly, Janice patted my shoulder and headed behind the counter.

At the same time, leaving the baby in her husband’s care, the woman came up to place an order. Along with the coffee, Janice gave her napkins, on top of which lay the paper with my scrawled handwriting. I stared at her intensely, hoping she’d take the offer of assistance. After glancing at Janice for some time, she flashed a ghost of a smile and pocketed the slip of paper, before her husband could see.

Walking back towards the table I observed that she held her head up, and her chin jutted out slightly. I didn’t know if I wanted there to be something more between us, but I knew I wanted to help her some way. One of the numbers on that slip of paper included my personal home and cell-phone number. I sat on a stool behind the counter, in the hopes that she’d call. Even f she didn’t that she sought someone else’s help. I genuinely needed to see that shy smile return to her rosebud lips to feel complete again. All these thoughts welled through my mind about this woman, but I did not even know her name. I fixed my attention on the couple again.
“Come, let us leave Asha,” said her husband. Wordlessly, she got up and followed him towards the exit, keeping a small distance away. Just before leaving she turned, glanced Janice, then straight at me, and mouthed ‘thank you’. I did know how she knew I was the one who gave Janice the slip but she had found out somehow. That knowledge that she knew was comforting.
Asha! Nita had told me that the name Asha, in India, meant hope. I couldn’t help but laugh at the absurdity of this entire situation.

Dedication:
To all women who take pride in who they are....bless you!