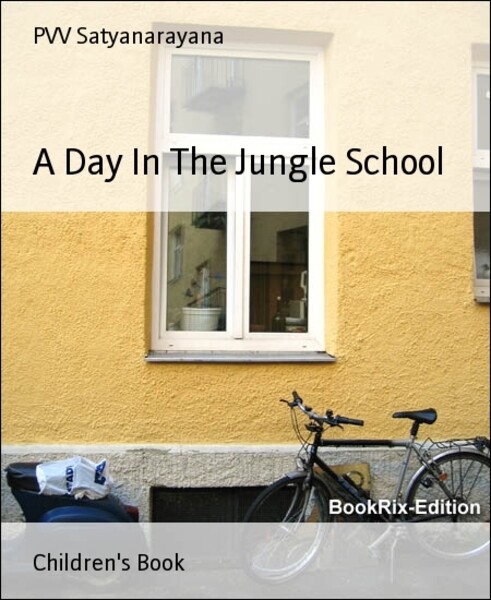 A DAY IN THE JUNGLE SCHOOL

MOTU, THE ELEPHANT, was the Principal of the jungle school. As the school bell rang, he had entered the Class-5. The classroom was brimming with hyper activity with the students – children of various animals of the jungle – playing, jumping, wrestling, laughing, etc. As they were too busy to notice his arrival, Motu made a sound on the table with the cane. The whole class came to order at once.

Motu started taking attendance of the class. As he called out the names, the students responded with present, sir! And by raising hands.

Motu had suddenly noticed that Nutty, the monkey, raising his leg while answering the attendance. Surprised, Motu demanded an explanation.

Dreary faced, Nutty stood up on the bench.

AFTER THE ATTENDANCE was over, Motu sent for Jacku the jackal, the school peon.
“Shall I ring the last bell, sir?” asked Jacku enthusiastically, entering the classroom.
“The school has just begun and you want to ring the last bell, you stupid!” exclaimed Motu. “Go and fetch me water for drinking”.
“Yes, sir.” Jacku ran out and returned with water in a jug and placed it on the Headmaster’s table, and disappeared.
As Motu was drinking water, Chandu the tortoise was at the door. “Good morning, sir. May I come in?”
“Good afternoon!” Motu said sarcastically. “So it has just dawned for you, eh?”
“I started from home an hour ago, sir,” said Chandu.
“And you were dawdling on the way!”
“No, sir. It is the sign-board on the roadside that is responsible for my delay,” explained Chandu. “The board says School zone. Go slow! So I had to walk slowly”.
“Wah…as if you are a fast walker, otherwise!” Sarcasm filled Motu’s voice. “You, brainless fellow! That board is meant for vehicles – to restrict their speed … to avert accidents,” he shouted angrily. “And certainly not for the tortoises!”

The whole class had burst into laugher. “S..i...l…e…n…c…e…” shouted Motu. The class became quiet. Chandu tortoise walked sulkily to his seat and sat down.
Sai, the camel, got up and went to Motu. And handed him a lens.
“What is this for?” asked Motu puzzled.
“You said, ‘Sai…lens’ just now, sir”.
“Shut up! I said ‘silence’ and not ‘Sai, lens’…” Motu was angry. “So you bring the lens to the class and play with it?”
Sai was frightened. “No, sir”.
“If I happen to see it with you in the class again, I shall bury you deep in the desert,” warned Motu. “Go and sit down”. Sai went quietly to his seat and sat down.
Motu sent for Jack again. He came running asking, “Shall I ring the last bell, sir?”
“You, bloody fool! It is not the time for the last bell,” reprimanded Motu. “Give these papers to the teachers of the other classes”.
Scratching his head, Jack nodded and left with the papers.

“NOW, CHILDREN, HAS everyone finished the homework?” Motu asked the class.
“Yes, sir” All the students said in a chorus.
“Fatty, show me your homework”.
Fatty, the hippopotamus, stood up slowly. “Sorry, sir. I could not do the homework”.
“Why? Were you busy brushing the donkey’s teeth?” Motu was furious.
“Really, sir. We have a donkey at home and my father was busy washing it,” replied Fatty.
This had enraged Motu. “You bloody! What is the connection between your homework and your father washing the donkey?”
“It is my father who does my homework, sir”.
“What! “
“Yes, sir. If I waste my time in doing homework, how can I play?”
Fatty’s innocent query had incensed Motu further. “You, idiot! You ask your father to attend the classes for you and you wash your donkey from tomorrow,” he shouted. Then he had asked all the students to keep their homework notebooks on his table, which they did.

“NOW I AM going to put questions from the lesson I had taught you yesterday” said Motu. “I hope all of you have read it thoroughly”.
“Yes, sir!” the class chorused.
“Ruby, the first question is to you…”
Ruby, the rabbit, got up slowly and said, “Sorry, sir. I did not read the lesson”.
“But, why?” Motu was annoyed.
“My daddy told me to read the GK, instead, sir”.
“You mean, the General Knowledge?”
She nodded.
“Why? He wants you to jump from the 5th class to JAS – the Jungle Administrative Service straight away?” His irritation became more.
“No, sir. Studies won’t fill your stomach. If you win the kaun banega crorepathi contest conducted by Bhalu moshai, you would become a multi-millionaire, he said”.
“What a wise counsel!” Motu was sarcastic. “You had better stop the studies and buy yourself a rich husband with the millions,” he said reprovingly.
“Yes, sir” said she shyly.
“Sit down!” hollered Motu.
She sat down bewildered.

“SIR!” DAISY, THE deer, stood up. Motu looked at her. “Yes, Daisy?”
“Filt has snatched away my Geography book, sir,” complained Daisy.
Even before the Principal had asked him, Filt got up and said, “I have lost my Geography book, sir.”
“So what?”
“If I don’t have the book, you will beat me. If I ask my father to buy another, he will beat me,” submitted Filt humbly.
Motu was amazed. “What about Daisy, then?”
“Daisy’s parents are good, sir. She can buy another one for herself,” said Filt coolly.
Motu was stunned. “What a logic!” he said derisively. “Return her book, or else…” he shouted.
“Ok, sir. If you assure not to beat me for not possessing the book, I shall return her book,” said Filt sounding innocent.
“Won’t you return otherwise?”
“No, sir”.
“I shall thrash your muddle-head!” Motu raised the cane angrily. “Return the book”.
“Ok, ok. Since you say I shall return it,” Filt returned Daisy’s book immediately.
Meanwhile Motu caught a girl dong disco in her seat. “Lovely, this is a class-room and not a dance hall,” he shouted. “Don’t dance in the class. Sit right”.
“I am not dancing, sir. The bugs in the bench are tickling me,” replied Lovely, the leopard.
Not knowing what to say, Motu said, “Ok, ok. Kill them after the class is over”.

THEN HE CALLED Jacku, who enquired whether he should ring the last bell.
This had enraged Motu. “I shall dismiss you from the service if you talk of the last bell again!” he warned the peon angrily.
“Please, sir. Don’t do that. I have many mouths to feed,” Jacku pleaded.
A little subdued, Motu asked him,” Tell me one thing, Jacku. Why are you in a hurry to ring the last bell today?”
Jacku twisted and twirled with shy and said, Í have promised my wife to take her to the human circus in the town today, sir”. The animals called the cinema, a ‘human circus’. “Oh, I see” a faint smile appeared on Motu’s lips.

AFTER JACKU LEFT, Motu announced to the class that he was now going to ask them simple maths.
“Jiffy, tell me, what would remain if you subtract five from seven?” he asked Jiffy, the giraffe.
Jiffy cleared her throat and said, “To subtract five from seven, we have to add three to the seven and …”
“I asked you to subtract and not to add,” Motu said haughtily.
“Yes, sir. Unless we add three, how can we subtract five from seven, sir?”
“What do you mean?”
“Firstly, we must add three to the seven and make it ten. Then add three to the five and it becomes eight. Now we must subtract eight from ten and we get two. So, seven minus five is two, sir” explained Jiffy, even as Motu gaped at her.
“It’s like showing your nose the round about way!” commented Motu.
“Its called modern maths, my tuition teacher has told me, sir,” said Jiffy.
As Motu was about to say something, there was a cry from Steve, the stag. “Sir, Tarry is breaking my fingers”.
“No, sir. I am only counting them,” said Tarry, the tiger.
“Why do you want to count them?” queried Motu.
“I am finding the answer to the sum given by you, sir” clarified Tarry.
“Why Steve’s fingers? Why not yours?”
“My fingers are holding a lollypop, sir”.
Motu became angry. “You, idiot! You are eating lollypop in the class? I shall break your back if you don’t throw it away”. Afraid, Tarry threw away the thing.
“Bhallu, you tell me this sum,” Motu asked Bhallu, the bear. “If I ask you to give me one kilo of sugar, how many grams would I get?”
“Eight hundred grams, sir” answered Bhallu instantly.
Startled, Motu looked at him angrily. “Eight hundred grams for a kilo?”
“No doubt, sir” asserted Bhallu. “When my father weighs it, you can’t get even a single gram more than that”.
“Oh, your father runs a grocery store, isn’t it?” recollected Motu, as though he had understood the message. Bhallu nodded. Motu asked him to sit down.

“BUMPY, TELL ME one unique function of computer,” Motu asked Bumpy, the donkey.
Bumpy got up and cleared his throat. “The computer is a mobile playground…”
Motu interrupted him, bewildered. “Hey, what is that again? Computer is a mobile playground?”
“Yes, sir. We can play many games on it,” explained Bumpy.
“So you call it a playground?” Motu was amazed. “Pray, what else?”
“I only play games on it, sir”.
Motu’s irritation was increasing. “Do you at least know how the bloody thing works?”
“It’s simple, sir. When we beat it with our fingers, it starts working”.
It was the end of Motu’s patience. “Who is that ass that has told you so?” he bellowed.
“It’s of course you, sir!” replied Bumpy coolly.
Motu jumped with rage. “Me? Shut up, you ass-head! It is not beating, but clicking and typing,” he yelled and explained again.
“Sorry, sir” Bumpy sat down.

Now, Motu beat his forehead and mused out of disgust: ‘why do you all eat up my brain like this? You are neither attentive in the class, nor study at home. Play, play – that’s what you do all the time … Thank God! I haven’t asked you these questions during the ensuing inspection by the Jungle Education Officer. You little rascals sure would have sent me home! … My God! You are not children… mini devils, I should say.’

Even as Motu was expressing his anguish, suddenly the last bell started ringing.
Startled, Motu ground his teeth. ‘That Jacku is a scoundrel. In his hurry to take his wife to the circus, he is ringing the last bell already…I shall teach the fellow a lesson’.
As ringing of the bell had come as a sweet music to the children’s ears, they got up instantly and started dashing out of the class noisily, even ignoring the Principal. Motu tried unsuccessfully to stop them saying, “It is not the last bell, but the wrong bell”.

As he stared at the empty classroom, a faint smile appeared on his lips. He mused, ‘the little devils have disappeared in no time! What a beautiful stage, the childhood is! Surely, a golden phase in one’s life … Children are the beautiful flowers and colourful butterflies in the garden of God!’ … He got up with a sigh and walked slowly out of the class.

Dedication:
To Dear Children - Who Are Universal!