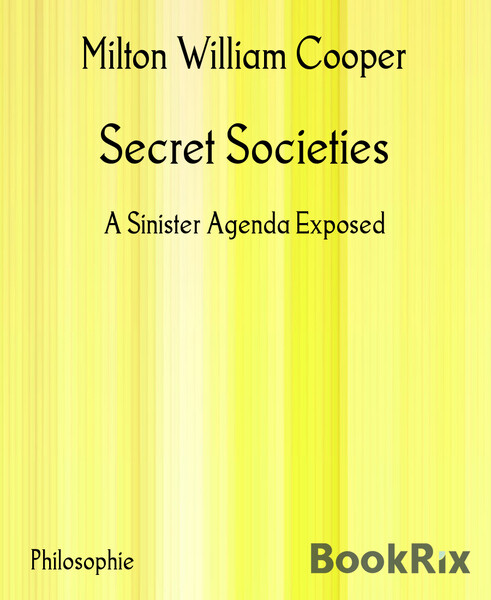 …there was light and…distortion too. Lies and betrayal, groundless love for truth and hidden agendas…

Mr. Cooper deals with the dark side of human life thus exposing many incredible details on hidden agendas. Many may smile on his lines, but a few might find words making sense to them, deep sense.

I found Cooper´s words worth publishing. That is the reason I picked them making them known to many people. We already know how the establishment has lied to us – think about the wars in Iraq, Afghanistan, Libya and recently their forced efforts to convince the public to go to Syria with deadly loads of bombs and missiles…

At least study Cooper´s report and see for yourself…

Another very interesting and exciting read is Cooper´s Behold A Pale Horse you can find for free at http://www.hourofthetime.com/wordpresstest/?page_id=3180.

Cover pic was found at http://www.wallpaper-gratis.eu/farben-formen/farben/gelb.php.

History is replete with whispers of secret societies. Accounts of elders or priests who guarded the forbidden knowledge of ancient peoples. Prominent men, meeting in secret, who directed the course of civilization are recorded in the writings of all people.


The oldest is the Brotherhood of the Snake, also called the Brotherhood of the Dragon, and it still exists under many different names. It is clear that religion has always played a significant role in the course of these organizations. Communication with a higher source, often divine, is a familiar claim in all but a few.


The secrets of these groups are thought to be so profound that only a chosen, well-educated few are able to understand and use them. These men use their special knowledge for the benefit of all mankind. At least that is what they claim. How are we to know, since their knowledge and actions have been secret? Fortunately, some of it has become public knowledge.


I found it intriguing that in most, if not all, primitive tribal societies all of the adults are members. They are usually separated into male and female groups. The male usually dominates the culture. Surprisingly, this exactly resembles many civilized secret societies. This can only mean that the society is working not against established authority, but for it. In fact, could be said to actually be the established authority. This would tend to remove the validity of any argument that all secret associations are dedicated to the "destruction of properly constituted authority." This can only apply, of course, where the secret society makes up the majority or entirety of any people which it affects. Only a very few fall into this category.


Secret societies in fact mirror many facets of ordinary life. There is always an exclusivity of membership, with the resultant importance attached to being or becoming a member. This is found in all human endeavors, even those which are not secret, such as football teams or country clubs. This exclusivity of membership is actually one of the secret societies' most powerful weapons. There is the use of signs, passwords and other tools. These have always performed valuable functions in man's organizations everywhere. The stated reason, almost always different from the real reason, for the societies' existence is important.


The comradeship is especially important. Sharing hardships or secrets has always been a special thrill to man. No one who undergone the rigors of boot camp is ever likely to forget the special feeling of belonging and comradeship that was shared between the victims of the drill sergeant or company commander. It is an emotion born of initiation. The most potent tool of any secret society is the ritual and myth surrounding initiation. These special binding ceremonies have very deep meaning for the participants.


Initiation performs several functions which make up the heart and soul of any true secret society. Like boot camp, the initiation into the armed forces, important aspects of human thought that are universally compelling, are merged to train and maintain the efforts of a group of people to operate in a certain direction. Initiation bonds the members together in mysticism.


Neophytes gain knowledge of a secret, giving them special status. The ancient meaning of neophyte is "planted anew or reborn." A higher initiation is in reality a promotion inspiring loyalty and the desire to move up to the next rung. The goals of the society are reinforced, causing the initiated to act toward those goals in everyday life. That brings about a change in the political and social action of the member. The change is always in the best interest of the goals of the leaders of the secret society. The leaders are called adepts. This can best be illustrated by the soldier trained to follow orders without thinking. The result is often the wounding or death of the soldier for the realization of the commander's goal which may or may not be good for the overall community.


Initiation is a means of rewarding ambitious men who can be trusted. You will notice that the higher the degree of initiation the fewer the members who possess the degree. This is not because the other members are not ambitious but because a process of very careful selection is being conducted. A point is reached where no effort is good enough without a pull up by the higher members. Most members never proceed beyond this point and never learn the real, secret purpose of the group. The frozen member from that point on serves only as a part of the political power base as indeed he has always done. You may have guessed by now that initiation is a way to determine who can and cannot be trusted.


A method of deciding exactly who is to become an adept decided during initiation by asking the candidate to spit upon the christian cross. If the candidate refuses, the members congratulate him and tell him, "You have made the right choice, as a true adept would never do such a terrible thing." The newly initiated might find it disconcerting, that he/she never advances any higher. If instead, the candidate spits upon the cross, he/she has demonstrated a knowledge of one of the mysteries and soon will find him/herself a candidate for the next higher level. The mystery is that religion is but a tool to control the masses. Knowledge (or wisdom) is their only god, through which man himself will become god. The snake and the dragon are both symbols of wisdom. Lucifer is a personification of the symbol. It was Lucifer who tempted Eve to entice Adam to eat of the tree of knowledge and thus free man from the bonds of ignorance. The WORSHIP (a lot different from STUDY) of knowledge, science, or technology is Satanism in its purest form, its secret symbol is the all-seeing eye in the pyramid.


Undesirable effects of secret societies and their aura of mystery has sometimes given them the reputation for being abnormal associations or, at the very least, strange groups of people. Whenever their beliefs are those of the majority they are no longer considered antisocial. A good example is the Christian church, which was at one time a secret society under the Roman Empire. In fact, the "Open Friendly Secret Society" (the Vatican) actually ruled most, if not all, of the known world at one time.


Most secret societies are generally considered to be antisocial; they are believed to contain elements that are not liked or are outright harmful to the community in general. This is exactly the case in some instances. Communism and fascism are secret societies in many countries