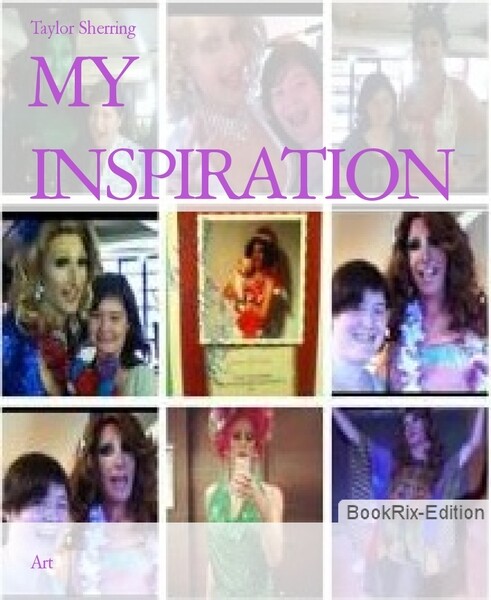 who is my inspiration?

Hey so we all have an inspiration in our lives who we love, adore and look to 2 as they are so amaing and stuff :P

so most people in this world look up 2 their parents, siblings, friends or a family member basically well this actually come to a suprise to you when i say that my inspiration is a DRAG QUEEN, yea thats right i look up to a man who dresses as a woman who preforms and has fun.

ill tell you why? its becuase shes beautiful and is one of the nicest people i actually know in this world. i wish i could be her or be her best friends as she would be awesome to hang out with when shes not preforming.

She is the only drag queen i have met in person and once i met her i instantly could not take my eyes off her becuase she looked so beautiful, the day i met her was October 31st 2012, halloween night and she was dressed as the wicked witch from wicked and she looked amazing.

Her name if your wondering is PRADA CLUTCH

like the brand of a bag from the shop Prada.

well you want to know more about her well i cant really give out personal information about her but i can say some things.

She is famous all over Australia and travels around to places to preform, shes all over google if you type in Prada Cluch drag queen and she will pop up.

Prada Clutch does many shows ajd hosts at different palces such as:

Prada has performed at & hosted:

- Priscilla by Leave it to Diva at Ayres Rock

- An Intimate Night with Prada Clutch at The Midnight Shift,

- Sex in the City Premiere at Fox Studios

- Boys Bar Up at Stonewall Hotel,

- Tranny Bingo at The Red Lion,

- Prada's Raunchy Richard's Bingo at Richard's On The Park

- Showtime at Richard's On The Park,

- Drag Time at Norton's on Norton,

That list is everything she does and all of those places you have to be 18 or older to go as they are in pubs and bars so as you see i cant really see her much and havnt seen her since march 13th 2013.

So the first night i ever met her she looked like this: 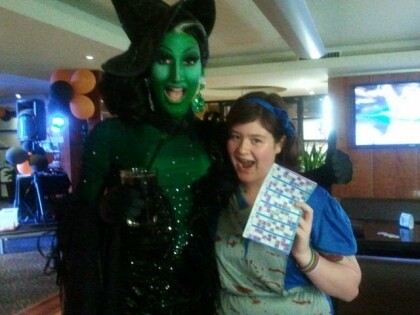 This photo is of me and her on the first night i met her at bingo, yes i went to play bingo which was hosted by a drag queen which was Prada Cluch and i also won bingo that night :)

She is amazing to awesome talk 2 and is quite understanding. i heart her <3

From the moment i met her she was NOT my inspiration, i didnt actually have one but over time i would say on the 6th of december 2012 i would say was the time she became my inspiration, but she grew to be in inspiration and i have always loved her from the first moment i saw her, she would be an awesome friend :P i wish i could be an awesome friend of hers but im just Tay who looks up to her and thats all it will be, im okay with that i guess.

This was the next time i had seen Prada Clutch which was a Thursday and the date was 6/12/2013 and this was bingo on a boat for 3 hours. i loved it as Prada was always in my view, she always looks amazing and i got to speak to her which i loved <3 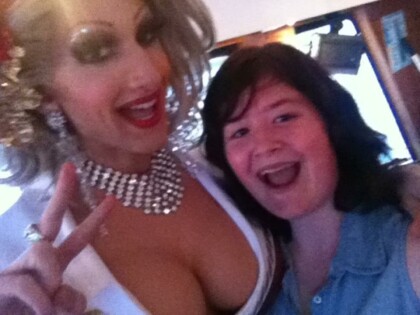 This is the photo i got of me and her on thet night.

*Peace* "Are we taking a selfie" are her exact words to when i was about to take the photo.

This was the first time i ever sked Prada for a hug and i was scared to ask, and Prada makes this noise like she didn't want to hug me but she did and it was the best lol!

i still remember what she said to me after which was "what you smelt was my BO" but Prada it was your rubber boobs i could smell :/

it was the last bingo for the year, which was pretty sad for me as i had only ever seen her 3 times this year and i really did miss Prada and still 2 this day i miss seeing her face.

Here is a photo from that night. 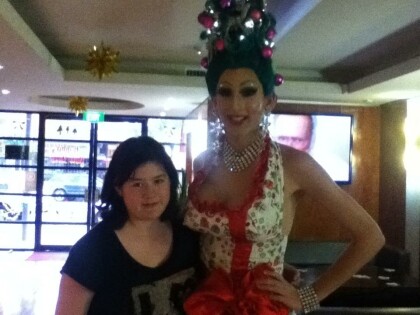 Her wig was a christmas tree and had a yellow star at the top and had nights in the hair, it looked amazing and the dress she is wearing she made herself and it was amazing i tell you.

That night Prada handed out a picture which was a christmas card to people and i got Prada to sign it. 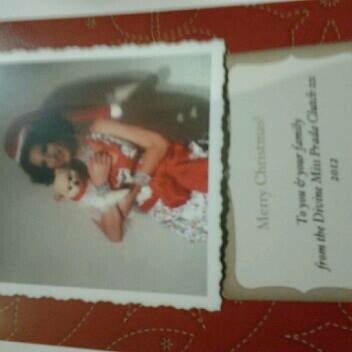 The card after she signed it 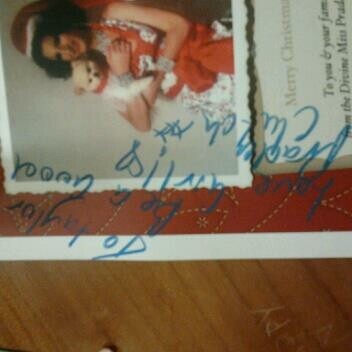 i was sad once the night ened as i knew it was time to go back home and never see Prada again for the rest of the year.

This was the first time this year i had seen Prada Clutch, but i was only dropping off some napkin flowers i had made for her birthday.

Here is a picture of the flowers i made. 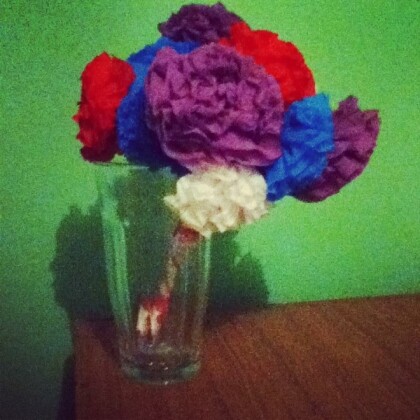 They were the best flowers i had ever made in my life and i didn't really want to give them up but i did make them for her so i let them go.

On that night Prada looked AMAZING as usual heres a picture of me and her. 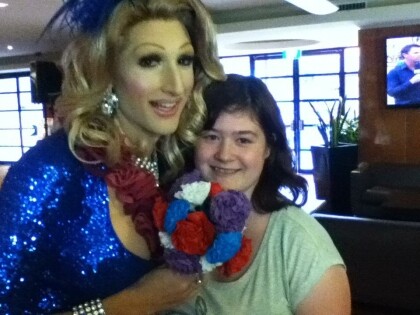 Never has Prada ever looked ugly as she is beautiful so thats why shes amazing and always looks amazing, she puts eaps of effort to make herself look amazing. :P

so my nan saved the day and took the photo, thought it look her about 30 seconds to learn how to use my ipod to take photos :P

i thought this ws the last time i was ever going to see Prada in my life which made me sad inside as i never se her anymore and it sucks so i message her on facebook ( none of you should add her, ill cry) but im pretty sure i annoy the hell out of her because of who i am which makes me sad inside but o well its life :)

Turns out 13th of March 2013 was the last time i have seen Prada this year and it really sucks as i really miss her.

here's 2 phots from that night. 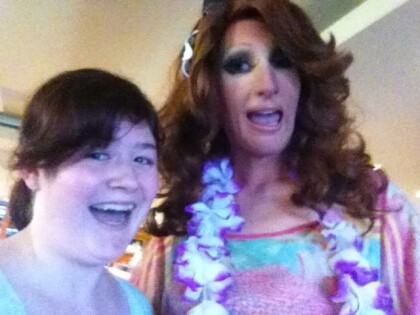 Here is another photo 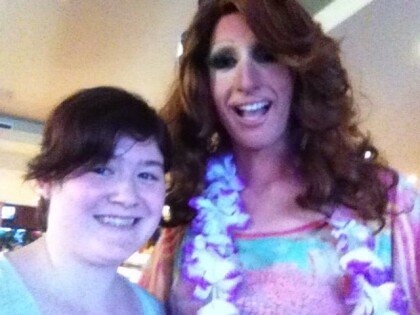 this was infact the last time i see her, as this night was the last bingo ever.

it was nice to be able to go and see her one last time forever.

she look amazing as always

here is a picture of me and her on that night. 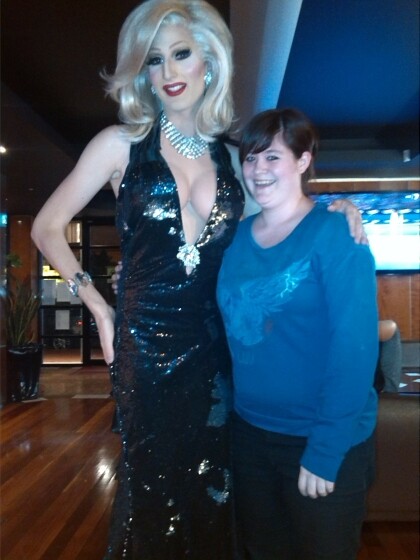 i wish i could tell her everything i want to but.... something stops me as i dont wont to bother her,

i guess what i want to say can stay within me.

ill never forget her, best memories i could ever ask for

I miss prada so much

She is my number 1 person i would go to

of she would listen to me :)

prada im not sure if you will read this but thank you for being you and shwoing me life can be fun and smiling is good :D