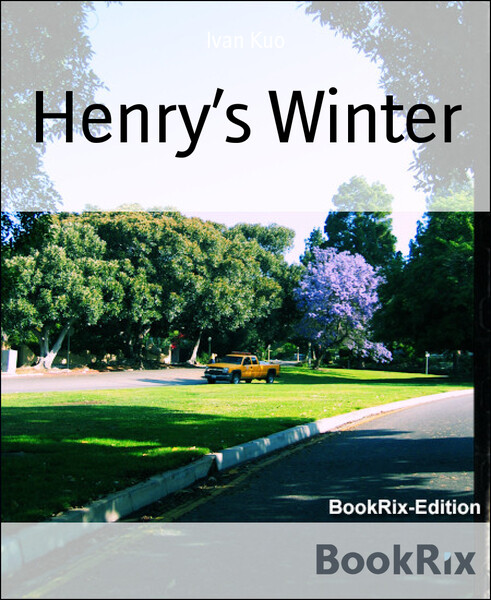 Henry is at home on a Winter day.  Most of those who live in the East would be playing in the snow.  Sadly, Henry lives in California.  One of the places on Earth where it doesn't snow much in Winter.  It is a cloudy day and Henry is bored.  He is a normal child and is very lazy.  Little does he know, that something exciting and adventurous was about to happen in his neighborhood.  Hello! I am Henry and I was a very lazy boy up until now.  I was living in Santa Clara, California.  Last winter, there was a strange incident that changed the way I looked at things.  This is an account of what happened last winter.

Winter break has just started and many people thought it would be fun but, in California, it doesn’t snow.  The day outside was cloudy and cold.  It was very quiet in my neighborhood.  No one would think of playing outside on a day like this.  I was at home.  I lied on the couch and complained to my mom about what I should do.  I was eating food, while watching TV, but I wanted to do something exciting.  If you could guess, I was very fat.  I was an only child and didn’t have anyone to play with.  As my mom ignored my complaining, I spied on my neighbor, Andre.  I looked at the Andre’s house through my telescope.  Andre was a very mean bully.  He was short and had blue eyes.  As I looked at him with my telescope, he was doing some strange things.

That was when my mom told me to exercise.  Exercise is the one thing I dread!  I was slow and not very athletic, so I hated exercise. Then, I saw my friend Ben.  I was sure that he would cheer me up as I exercised.  Ben was a very helpful student that loved to run around the neighborhood.  He was tall and skinny with brown eyes.  Ben told me to run around the neighborhood.  After I did, he asked if I felt better.

I said, “I do feel better!  It’s nice to exercise every now and then.”  Ben smiled.  I told Ben about what Andre seemed to be doing.

Ben said, “Let’s see what he is up to by hiding around his house.”  I agreed.  After we hid, Kristine passed by Andre’s house.  Kristine was a short student.  She claimed that she is the smartest kid in our class.  All of a sudden, Andre grabs Kristine and closes his door.  Ben and I were very surprised.  I took out my mini-scope and tried to figure out what was going on.  Andre was talking about something to manipulate Kristine.  When Kristine came out, she didn’t act like herself.

My next-door neighbor, Jonathan, figured that out.  He saw us hiding and asked us if we knew why Kristine was acting weird.  We told we didn’t know.  Jonathan was an annoying child.  He told us that he has been noticing an increasing amount of people not acting the way they usually act.  We discussed with Jonathan what Andre has been doing.

Jonathan said, “Andre must be behind this.”  We thought that too, but had no evidence.  We told Jonathan that we still don’t know how Andre has been manipulating people.

Jonathan exclaimed, “Did you say, manipulating?”

We said, “Yes and why?”  As you know, I am the smartest bookworm in the world.  We rolled our eyes.  Jonathan told us that there was a way to manipulate people and make their thoughts about life change.

We left for the library.

I told Ben, “We have to go to the library on winter break?”

Ben said, “Do you want more people to be acting weird around here?”

“This must be what Andre has done,” I said as I broke the silence.  Jonathan said that the librarian told him that these books were supposed to be confiscated.

Ben asked, “Is there a way to reverse it?”

I said, “Here is how we will stop Andre.  Ben will be the brains of this operation.  Jonathan will try to reverse the manipulation on the people.  And I will stop Andre.”

“How will you stop Andre?  He could manipulate you!” Ben said.  I told Ben that I didn’t have anything that I loved to do.

“I was the laziest person in this whole neighborhood until now.  I just realized I’ve been running at least a mile,” I said.  Ben and Jonathan agreed with the plan.

“Operation Demanipulate has begun!” we said.  We spread out and did what we set to do.

Ben said, “There is nothing we can do except return their old thought to them.”  Ben and Jonathan try to refill Kristine and her mother’s emotions.  Meanwhile, Henry has just reached Andre’s house.  Henry knocks on the door.  Andre opens the door and grabs Henry.  Andre looks at Henry for a while.  Andre gets worried.

Henry said, “What?  You have nothing to manipulate me with?”

Andre said, “It’s not just that.  You are skinny! You used to be fat!”

“What evidence do you have?” Andre replied.

“Lots,” I said.  I called the police and told them about what had happened, and Andre was sent to Juvenile Hall to learn not to manipulate others.  Kristine and her mother have had their feelings restored a little.  Overall, this was my account of what happened during winter break.

Now, winter break has ended and I have new friends.  The bell rings and it is time for school.  Ms. Lily, my teacher, is getting ready for the day.  Once we entered the classroom, it was really warm.  Most of the students could smell coffee, too.  Today, Ms. Lily walks to her classroom and grumbles, “Another day with my horrible class.”  To her surprise, most of us has changed.  I have become more athletic and smart.  Jonathan has erased his habit of being annoying.  Finally, Kristine has had her emotions changed.  This means that she is not proclaiming that she is the best.  From now on, Henry remembered that not only does good conquer evil, but you need knowledge, skill, and a team to accomplish a goal.

I took me a week to write this story.  The name is Ivan.  I like to write short stories for others. 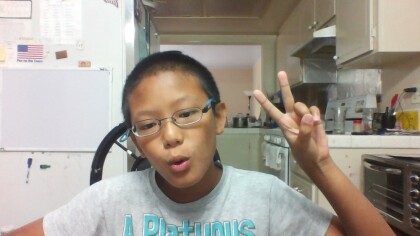 I hope you remember the theme of the story.  Not only does good conquer evil, but you need a plan, a team, and friends.  Or something like that.  See you next time!  Oh and remember it doesn't take big thing to be big.  Start out with small.  Then you can add upp to accomplish great things.

Dedication:
Dedicated to my friends and family.