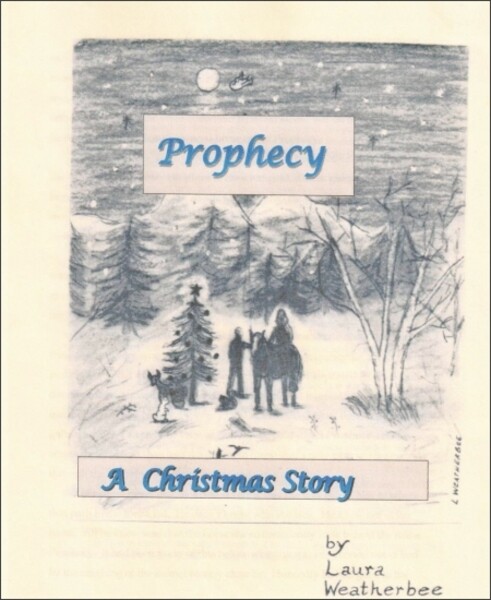 The snow fell lazily from the ash gray sky in a graceful, carefree pattern, manifesting a blanket of virginal dreams upon a valley surrounded by protective mountains. From where he was, the young man’s reflection under the dapper moon resembled that of a motherless child in search of a purpose and tracks of a father to follow. In the wide-open field he stood alone. Far off into the distance he could see the brilliantly stanced horse called Prophecy.
Moments later, as he watched, she appeared the worshipped daughter of the sun, her hair billowy clippings of chestnut gold, clad in garments protecting her from the December cold. As she grasped onto the saddle’s cantle and mounted the ruggedly framed animal whose coat was the color of autumn brown, dainty flakes of snow fell upon Prophecy’s forelock, mane and nose.
Benjamin, who was no more than a teen, sighed tremulously as he watched this from afar. For a moment he stood back, thinking how illustriously grand it surely would be to accompany the heiress of flaunting beauty on her mystical, magical travels.
Every evening at this same time he stood out in the middle of the field, there in the unrenowned valley, to witness what was an extraordinary show performed by the silhouetted blond, a woman who had appeared from beyond the mountains, a place that Benjamin had never dared trespass. She would mount her dashing beauty, Prophecy, and then descend from the mountain in a gallant stride. Through the crest of snow she would direct Prophecy’s canter, across the field and then into the phantom forest that’s only path wove narrowly through the towering figures of spruce and pine.
Benjamin never exactly knew where it was she was going. Nor to where that path in the forest led. He didn’t know who she was. He knew not of her name. All he knew was that the horse she so confidently rode beheld the name Prophecy. It had been many nights before when he was summoned out of bed by the neighing of the animal so very close by. Hurriedly he had gone to his window. There he had peeked outside. In his view he had found the most magnificent creature he had ever seen. Upon his land the four-legged animal confabulated and preached, the moonlight seizing its speech. Benjamin was in awe. He had never seen a horse so close before. He knew that many years before; his mother had owned a horse. His father often told him that sometimes on clear, cloudless days his mother would disappear on her horse for hours on end, and no one truly knew where her travels had taken her.
Farther away, standing alone upon the tallest mountain, Benjamin could see the silhouetted blond. In the late night she appeared as an incomplete shadow, a delusion created by the falling snow.
“Prophecy!” echoed her voice.
To Benjamin, as he watched from his bedroom window, her voice seemed to be that of a rousing murmur from an angel undisguised.
Hearing its owner’s beckoning cry, Prophecy, without hesitation, galloped back up the mountain. Once the two were reunited, they sauntered off together beyond the mountain.
Benjamin knew at that very moment that he must seek them again. Prophecy, he was sure, had come to his window on this night for a reason.
Certain of this simple fact, Benjamin stood outside as evening fell the following night. Bundled in the warmest coat, boots and gloves, he patiently awaited their return.
And, indeed, they had returned.
While the noiseless snow rained she rode Prophecy, who trod proudly as if carrying a prize. Sleigh bells were affixed to his bridle so that with his every step the bells jingled and jangled, clang and rang.
They did not take their usual route into the forest, as they had the evenings before. Tonight, upon this wonderful Christmas Eve, Benjamin was aghast with delight to see that they were heading toward him. Anticipatingly, he waited in the center of the wide-open field.
Her smile, as Prophecy carried her near, cascaded into crystals of firelight in his eyes. He was almost afraid to move, to utter a mere word. Was it a dream perhaps? No, no … it couldn’t be. No mask or shadow could conceal such an extravagant aura.