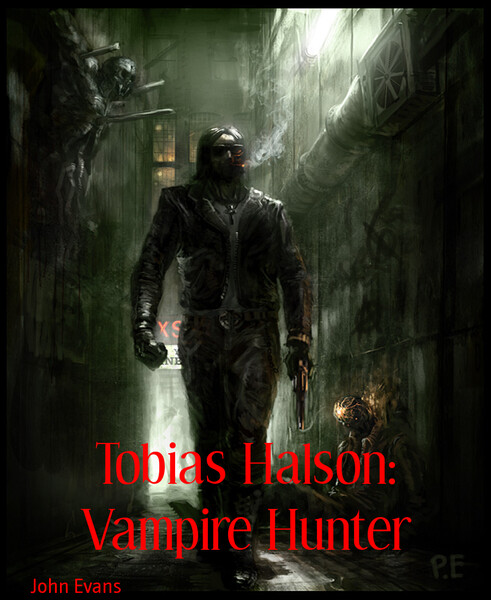 "Man fears the darkness, and so he scrapes away at the edges of it with fire." ~ Rei Ayanami (Neon Genesis Evangelion)

My name is Tobias Halson and I am a Vampire Hunter. No, seriously I am. That’s why I was chasing a dirty redneck down one of Philly’s darker smellier alleyways with an ax. Don’t laugh I am not kidding. A lot of people have preconceived notions about how Vampires are supposed to look and act mainly from bad fiction and even worse movies. They are not the deeply misunderstood brooders of Ann Rice, or the black clothed pale makeup wearing Goths and they are especially not the lame homosexual glittering poofs from those godawful Twilight movies.

I hate those things. They give people the wrong ideas about Vampires and either get them killed, turned, make my job harder or worst case scenario; get me killed or turned. Kids these days are too clueless and are far too willing to swallow that crap. What happened to the classics? Damn education system. That’s what happens when you cut the funding for schools; dumb kids who are easy prey for monsters. Next stop communism.

Vampires are monsters. Forget everything you have seen in movies and on TV. Fuck Twilight, True Blood and all those other goofy things that portray them as beautiful bisexual creatures of darkness and sex. They are monsters plain and simple. They exist on the lives and blood of living mortals. Vampires, in general, don’t do a lot of that movie stuff; they are just obsessed with feeding. Those lucky enough to live for a century or more eventually move on to other things but the younger vampires get hunted down and killed before their blood lust becomes a serious threat to a population.

There is nothing posh or elegant about vampires, especially this one. For one he reeked to the high hills. I could have probably tracked him by smell alone; I almost wished my nose didn’t work. His stink was what you would get if you mixed a meth lab with a slaughter house. In addition to his saggy seated worn jeans and grubby undershirt, he was covered in dirt and grime as though he hadn’t bathed even when he was human.

He pelted down the alleyway as fast he thought he could go. Thank god young vampires are generally unaware of and have no clue how to control, their new vampiric powers. Otherwise, he would have been leaving me in his dust. I am fairly athletic due to my lifestyle and being of average height gives me decent length legs to run good distances and cover a lot of ground, but I can’t keep up with a supernatural predator that can outrun a car at city speed limits.

Newly minted vampires are like anyone else who is new something. It’s like learning a martial art. A student who has been studying for only a few weeks isn’t going to know much or be much of a threat than anyone else. However if they spend their whole lives learning and gaining experience they can be extremely dangerous, it’s the same with vampires. The longer a vampire is around the more time they have to learn and grow in power, knowledge, and experience. So the best time to take them out is when they are young and clueless.

This guy had only been one of the undead for about a week but in that one week, he had single-handedly massacred everyone in his trailer park on the outskirts of Philadelphia. He had then turned it into his lair until I had been called in and smoked him out by setting the whole thing on fire. Vampires hate fire, especially being on fire. He had fled in his rusted out old truck, which turned into a spectacular case with me hot on his tail.

He had wrapped the pick up around two street lights and a parked car. I pursued the vampire as he fled down the alley abandoning his truck. I kept my ax held low against my leg so no one would call the cops to report an axe-wielding nutter chasing people. I did NOT need the police to complicate my job even further. They didn’t really warm to people with weapons killing things that are hard to prove are not human even when they are not a pile of ash.

He slipped in a puddle of something slimy in the street and went down to one knee as he tried to turn the corner down a branch of the alley looking for a way back onto the street. He disappeared around the corner and from my sight as I slipped my hand into my jacket going for my gun. If it looked like he could get away I would have a chance to take a shot at him. I got lucky and the alley he had run into had a fifteen-foot chain link fence across it cutting off his escape. I drew my 1911 as I came around the corner to see him attempting to climb the fence. I aimed the .45 at the back of his skull and shouted.

“Oi Stinky! You might be a redneck if you are a smelly undead bloodsucker.”

Ok, it wasn’t very witty, but give me a break I had a long day, then spent most of